After a split weekend at the LSSU Tournament, the women’s basketball team will host two Ohio teams at the Berry Events Center.

The ’Cats began their play at the Lake State Classic on Saturday, Nov. 21 in a game against the University of Minnesota-Duluth Bulldogs. NMU toppled the Bulldogs in a 60-55 victory. 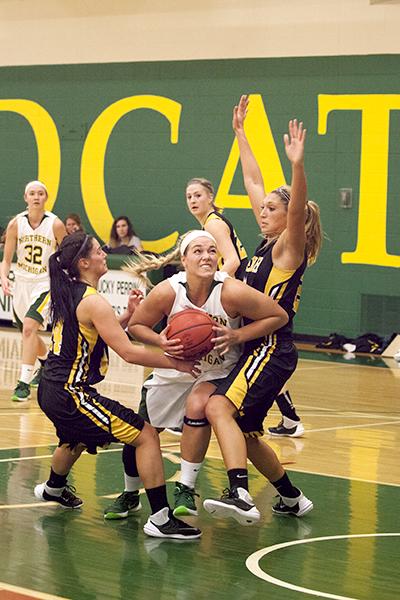 “I think we played extremely well against Minnesota-Duluth on a defensive end,” head coach Troy Mattson said. “We held them to 51 points. You have to feel good about that every single time you keep a team down that low.”

The Bulldogs pulled ahead in the first quarter, posting 13 points while the Wildcats had nine points.

Freshman guard Haley Kershner made a three-pointer that helped the Wildcats gain a 20-19 lead at the end of the first half.

During the third quarter, NMU took a five-point lead over the Bulldogs after junior guard Bre Gaspervich took a couple free throws to increase the score to 31-26. After trading a few points, the Bulldogs took a 38-36 lead near the end of the quarter. A last second jump shot by Gaspervich tied the score as they entered the final quarter.

The Wildcats pulled ahead, starting the fourth quarter with a five-point lead. Freshman guard Chloe Tompkins threw a threepoint shot to broaden the gap between the Bulldogs. In the final quarter, NMU was able to keep at least a three-point lead at all times.

The Wildcats returned to the floor Sunday, Nov. 22, but Gaspervich’s 20 points weren’t enough to keep the Minot State University Beavers from coming out on top.

NMU trailed 17-11 at the end of the first quarter. The Wildcats were able to keep the gap from increasing too much as Kershner’s three pointer just before the buzzer left the Beavers at a 33-26 lead at the half.

In the third quarter, Gaspervich scored six of her 20 points and led the ’Cats to outshoot the
Beavers 16-14.

Gaspervich’s jump shot at the start of the final quarter put the Wildcats within three points of the Beavers before Wildcat freshman guard Emily Schramek made a three-pointer to tie
the game.

The Beavers responded with their own three-pointer to pull back ahead. The Beavers never looked back as they finished the game with a 59-51 victory.

“Offensively we are still in progress, trying to fight our way out there,” Mattson said. “We need to shoot better, and we need get on our home court so we can feel more confident”

The Wildcats will host the Walsh University Cavaliers at 6 p.m. on Thursday, Dec. 3 at the Berry Events Center.

All the leaders in the game were seniors. Guard Lauren Gruber posted 23 points with center Courtney Lemon getting 10 rebounds. Guard Alyssa Colla had 12 assists with senior forward Abbey DeBruin trailing her with 10 assists.

The Cavaliers are 2-1 overall so far this season. Thursday’s matchup be will the first conference game for both teams.

In an exhibition match, the Cavaliers beat division I Butler University 70-68.

The ’Cats move on to play the Malone University Pioneers at 1 p.m. on Saturday, Dec. 5 at the Berry Events Center. Malone is 2-2 overall and will play their GLIAC opener on Thursday, Dec. 3 in Houghton against Michigan Tech.

Last season, the Wildcats visited Canton, Ohio and lost to Malone 52-48. Colla reached double digits in both points and rebounds

Gaspervich is leading the team with 12.5 points per game. She was injured in practice on Monday, and it is unclear whether she will play in this weekend’s
home opener.

“I mean she’s basically our best player out there right now,” Mattson said. “It could really affect the outcome of some games.”