Directed by Adam McKay, this financial tale shows the late-2000s economic crash from the perspective of some business-world insiders. The all-star cast produced a lot of notable performances, and the directing, though unorthodox, suited the irreverent mood of the story.

The real-estate bubble burst in 2008 because the FED finally adjusted interest rates to reflect the economic climate; for years and years, low-interest loans were being floated to anyone who cared to apply, often with no credit checks. 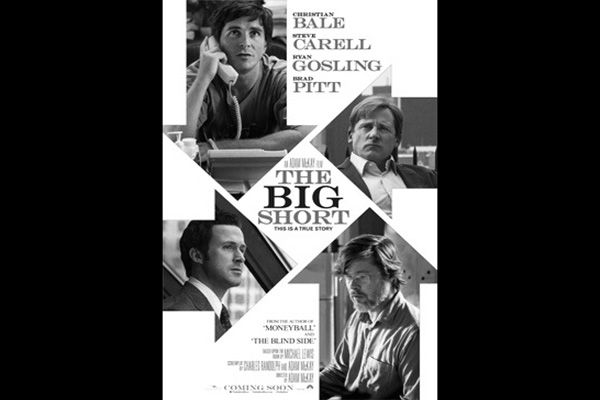 However, when unqualified borrowers had massive mortgages and couldn’t afford the monthly payments, hundreds of thousands of homes were left vacant, flooding the real estate market and greatly reducing prices.

To someone buying a house, this was great news. However, for people who had money in the stock market or worked in commodity-driven industries, it was the worst possible news.

The aforementioned insiders saw it coming. Michael Burry (portrayed by Christian Bale), a former neuroscientist who started Scion Capital in California, used trends and historical comparisons to predict a market crash more than two years before it happened. When he began shorting the American housing market in 2005 and 2006 he was laughed at.

“Who would want to bet against this market?” the bankers asked. They gleefully sold him the sort of stock options he was asking for—which, by the way, had never been bought nor sold before—and expected him to go belly-up when the market continued to grow and the banks demanded dividends on the shorted stocks.

But the bubble burst, as we all know, in 2008. When the market finally took its dive, the central cast of the story made millions of dollars and in some cases, billions. But as Brad Pitt’s character admonished two young brokers celebrating the coup in a casino, this economic downturn left 99% of the country worse-off than before. Jobs lost, homes foreclosed upon, tenants evicted, vehicles repossessed.

All told, the people at the center of the deal, which is technically called a “credit default swap,” profited immensely but completely lost faith in the system. The film’s depiction of this contradiction is where it really shines; just because the “good guys” won, at the expense of the big banks, doesn’t mean the movie ends on a triumphant note.

In fact, as Ryan Gosling’s narration informs us, only one banker went to jail in the midst of all the fraud and loss and mismanagement. And he wasn’t even responsible for anything big.

The fat cats, the men and women in charge of giving false AAA ratings to bad mortgages and synthetic collateral-debt obligations and misleading the American public, got bailed out of their mess by the U.S. government. And it continues today. The New York Times was quoted as saying “The Big Short” offered “the strongest film explanation of the global financial crisis.”

Although the film struck a lot of chords with the audience—funny, interesting, heartfelt—Adam McKay showed a large amount of depth in his screenwriting and directing skills. The directing itself involved a lot of phone conversations: jumping back and forth, showing action and reaction, depicting what was happening at the same time in multiple locations.

The omniscient perspective worked well for “The Big Short,” and it was a break from McKay’s typical style; he’s best known for his comedy work. McKay and his partner-in-comedy, Will Ferrell, have worked together in film production since “Anchorman” in 2004 and even “Saturday Night Live” before any of that.

The comedic sensibilities that brought us “Step Brothers” and “Talladega Nights” also bring shots of Steve Carell viciously insulting a man for trying to share a taxi, Ryan Gosling bullying interns at the gym and Brad Pitt solemnly insisting that organic seeds will be the new currency. The movie works.