With four WCHA series remaining in their home schedule and six conference series left overall, the Wildcat hockey team has put themselves in control of hosting the first round of the WCHA playoffs at Berry Events Center for the first time since 2012. 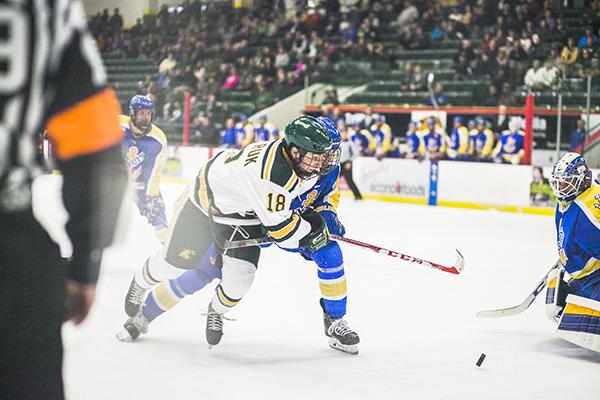 To do so, the ’Cats admit they need to take care of their home ice opportunities they have remaining, starting with the University of Alaska Fairbanks Nanooks this weekend.

“It’s huge having so much time left at home,” NMU head coach Walt Kyle said. “It’s difficult to be on the road so much the first few months, but it should work in our favor the second half. We still have to do your job and win, but it’s easier to win at home. We only have one trip remaining outside of the U.P., so we should have a lot of rest.”

NMU is coming off a weekend where they upset the No. 17-ranked Minnesota State-Mankato Mavericks in the opening match of their two-game series on Friday, Jan. 8 by a score of 3-1. Freshman goalie Atte Tolvanen stopped 41 shots in the upset win.

The following evening, the ’Cats put in freshman goalie Mathias Israelsson in net over Tolvanen, as Israelsson stopped 40 of 43 shots for a .930 save-percentage, but his performance was not matched by the Wildcat offense as NMU dropped the second game by an identical 3-1 score to split the series.

“Winning Friday put us back in the race of things,” Kyle said. “Mankato is a really good team, and we knew they’d be a tough challenge. Our goaltending was great on Friday as it has been all year. We were outshot both nights, and Saturday’s score didn’t represent how we played.”

The ’Cats now sit 6-6-4 in conference play and sixth in conference standings, holding control of their own destiny to reach the fourth seed to host the first round of the conference playoffs. Ferris State is right above NMU with the same 16 points, with the two teams playing an all important series in February that could decide the fate of the clubs. Bemidji State sits in fourth place with 17 points, but the ’Cats have two games in hand remaining on Bemidji down the stretch.

The Nanooks come to Marquette fighting for their playoff lives, sitting on the outside looking in on the playoff picture in ninth place out of the 10 WCHA teams with 12 conference points.  The University of Alaska Anchorage is right above them in the eighth and final playoff seed with 12 points as well, but only 14 conference games played compared to the Nanooks’ 18 conference games played.

The ’Cats split their first series with the Nanooks, dropping the first match 5-2 on Friday, Nov. 6 than splitting the series with a 5-2 win the next night on Saturday, Nov. 7.

“We had a real tough series against them last time out,” Kyle said. “Their power play killed us in the first game. We’ll have to prepare ourselves as they have a lot of energy and speed.”

NMU is skating with a 16.5 powerplay percentage with an 84.9 penalty kill percentage.

“The biggest thing is our powerplay needs to step up for us to be successful,” Kyle said. “We don’t score a ton of goals, like most teams in the WCHA, and the teams who do score can get the puck to the net on their powerplay unit. When we improve our powerplay, we’ll be in every game we play.”