Due to the increase in demand for wireless broadband, WNMU-TV 13 will participate in the Broadcast Incentive Auction provided by the FCC to possibly relinquish its spectrum usage rights to wireless telecommunication providers. 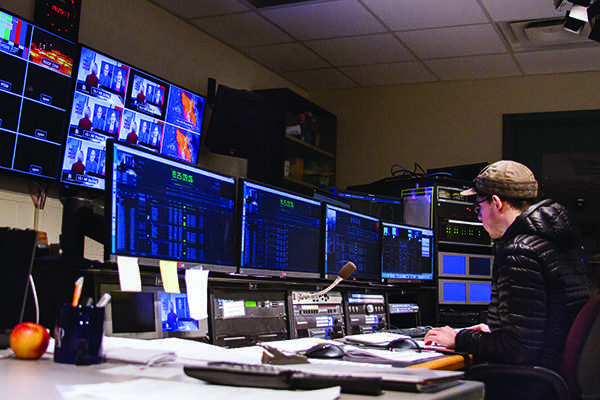 The auction is scheduled to start on March 29, and there are two separate components to it. The first is a reverse auction that will allow interested broadcast stations to relinquish their broadcast spectrum rights to potential bidders.

The second component of the auction is a forward auction in which telecommunication providers will bid for the flexible use of spectrum licensing that will be available.

“What we [NMU] hope to gain is the ability to continue broadcasting. We’re not in this to get out of the business. We’re interested in seeing if there is sufficient money available from the auction, could we use that to help sustain the TV station?” Director of Broadcast and Audio Visual Services at WNMU-TV 13 Eric Smith said.

He said if there is enough demand for the spectrum of TV 13, which also produces Public Eye News, the NMU Board of Trustees will have to decide if it is willing to move to a different broadcast channel or just walk away from the business with the revenue from the auction.

“It’s a challenge, especially in today’s market, to maintain that funding model because we never know what Congress is going to do with funding for public broadcasting. They’ve talked about cutting it and they talk about reinstating it so that’s always kind of up in the air,” he said.

Because of the fast-rising use of white space radio spectrum waves by mobile carriers all over the nation, Congress had originally approved the FCC to have incentive auctions in 2012. It had already been introduced in the 2010 National Broadband Plan with a plan to meet the growing needs of the future (now) and to reduce the congestion of public broadcasts on wireless networks. The U.S., according to the FCC, is the world leader in wireless infrastructure and advancement of the LTE network.

The auction is intended to serve as incentive for broadcasters like TV 13, which is also a PBS affiliate, to sell or even consider moving their broadcast to a different channel.  This will allow major telecommunication providers to have a more open spectrum to use higher level frequencies, which will allow them to provide even more quality wireless services.

“We’re treated like any other station, whether it’s a commercial station or another non-commercial station. We can enter the auction because we have one of those TV channels where we can participate and possibly receive some proceeds for it,” Smith said.

According to the FCC website, it is completely voluntary for broadcasters like TV 13 to participate in the auction, and Congress has even mandated that the FCC make all reasonable efforts to preserve the geographic footprint and population served of each station that will participate in the auction but ultimately remain on the air. As a result of the auction, there will be fewer channels available in the U.S. for television. It has no end date until all budgetary transactions regulated by Congress are met, and the FCC will publicly disclose the results of the auction once they have been reached. Changes on public television will not begin until after the results are announced.

“The reason that we elected to participate in the auction was we didn’t want to be locked out,” Smith said.” By participating, we can monitor the auction and, if the numbers continue to look good, potentially we could tell the FCC we’re interested in receiving a payment and then move to another channel or do something else that will allow us to continue broadcasting.”

TV stations around the country that will participate in the reverse auction must have submitted an application by Jan. 12, and other business entities seeking to buy wireless spectrum in the forward auction must apply prior to 6 p.m. on Feb. 9.

“We’re looking at this auction as a way to secure a large enough payment that we could take that money and put it into some sort of an endowment and use it to provide the annual operating revenue for the station,” Smith said. “That would make it stable and a lot more reliable for not only the viewers who watch the station but also the students here at NMU who rely on the service to learn how to be multimedia production people.”