Cool the Bern: Sanders can’t give us everthing he wants

Young voters are fired up for the election in November, distracted by a promise of debt-free college, but they haven’t noticed the cloud of smoke around Bernie Sanders’ campaign or that they’ve been “Berned.”

Sanders is the class president candidate who promises extra recess and better school lunches. These stances have merit, not unlike tuition-free and debt-free college, higher minimum wage and equal rights for all people. He truly paints an exquisite picture of his dreams for an ideal government. But that’s all that many of Sanders’ ideas will ever be—dreams. He’s promising more than he can deliver. Forget about right and wrong; let’s focus on how realistic his promises are.

As much as Sanders would love to say that he’ll raise taxes only on those who are in the 1 percent, his campaign website says otherwise. 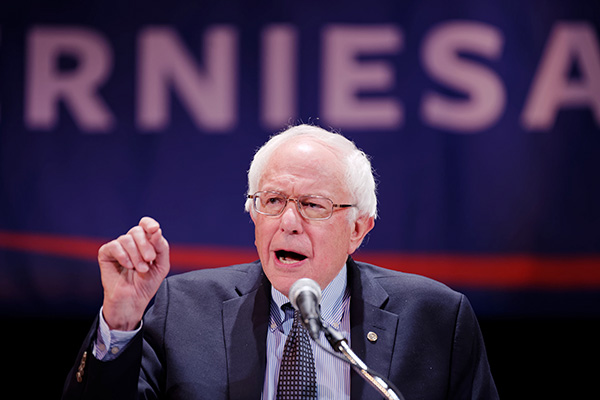 He wants Congress to raise your (the working class) payroll taxes by 0.2 percent. This isn’t a significant or terrifying amount, and I think it will be worth every penny. I’ll gladly pay an extra $2  a week in order to secure paid sick leave and vacation days.

However, Sanders doesn’t like to touch on this subject because telling people you want to raise their taxes will start an outrage. Saying that he will only tax the 1 percent simply isn’t true. This issue especially is one that I don’t hear mentioned in the media, and it really should be.

Raising taxes by such a small amount isn’t something I would be mad about; however, I do think it’s something that left-wing voters should know. Imagine the surprise of all the uninformed voters, both for and against Sanders. People will look only at the headline “Bernie’s raising your payroll taxes” and not take into consideration that the benefits of this program far outweigh the small costs per
person.

Sanders wants to rebuild America. His plan has two main objectives: to create more jobs and to fix our infrastructure.

I’m not sure how I feel about the second half of that plan. I’m sure that our roads and bridges could be safer and I don’t think redoing them would be a negative, but if this were really a problem, then every other candidate would be mentioning it. If America was physically falling apart, Sanders wouldn’t be the only person talking about it.

A millennial’s favorite thing about Sanders is his plan to make college practically free. This is the second issue on Bernie’s list mostly because he wants to hook the new and young voters.

Secondary education reform is one of the only issues that my generation focuses on, but Sanders’ other stances are consistently left out by millennials, and no matter how much you wish for free college, there are many other opinions to be formed concerning the upcoming election.

Even if Sanders could wrangle Congress to pass a tax increase on Wall Street, this wouldn’t generate enough money to provide free tuition at public universities and colleges. The National Center for Education Statistics (NCES) says there are 20 million students at public universities in our country (not counting private institutions) and lists the average tuition at almost $16,000 per student per one
academic year.

If Sanders’ plan works, he speculates it will generate about $300 billion in revenue a year. As college students, we can all agree that we wouldn’t say no if we were offered free college but frankly, offering free tuition at all public universities isn’t feasible.

As we see once again, Sanders wants to generate revenue for this program by raising taxes, this time on Wall Street. Whether you think this is fair or it will hurt big business, let’s agree it’s unrealistic.

While I admit that I don’t want to stop the Bern-ing, we do need to cool off and look at what else Sanders and the other candidates are saying. If you still like Sanders after making yourself a well-informed voter, then “Bern, baby, Bern.”