Ron Fonger has come a long way since his days of covering feuds between the NMU administration and faculty, state funding for Michigan universities and other stories as a North Wind reporter and editor.

Now, he’s known as the investigative reporter who put the Flint water crisis on the map. 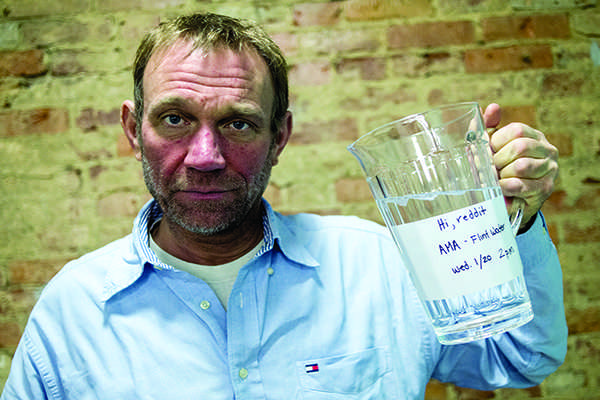 “The public was getting the bare minimum of the story,” Fonger said. “We had people in government running around saying the water was safe and not to worry, but they knew otherwise. They knew the lead levels were rising, and even their own flawed tests showed it. For decades our lead levels were zero, then all of a sudden with the switch of the supplier it began increasing.”

Fonger attended NMU from 1982 to ’86, and was a member of ASNMU before joining The North Wind as a senior reporter, becoming editor-in-chief his senior year. He also interned at The Mining Journal during college.

“I think the great thing about being an NMU student is you always have a lot of opportunity to do a lot of different things, compared to being in a big program with a lot of competition for the same experiences,” Fonger said. “As soon as I left NMU I was working at my first job within two or three days, and it’s been continuous ever since.”

His time at The North Wind propelled a line of newspaper jobs across Michigan, Indiana and Ohio before returning to his hometown of Flint in 1995, where he has worked at The Flint Journal ever since.

When Fonger began covering the city of Flint for the Journal, the city had just changed its water source to the Flint River on a temporary basis while a new pipeline was in the works from other parts of Genesee County.

The Flint River hadn’t been used for drinking water in over 50 years, and Fonger said the anecdotes he heard from its usage made him want to learn more.

“Almost immediately, people started showing up at city council meetings complaining about the water,” Fonger said. “The claims were it smelled funny, had a chemical smell, had an odd taste, gave rashes, et cetera.  We reported on it, but the complaints continued, inspiring me to continue covering it.”

“Around the same time Flint started having water main breaks, bacteria got into the system and a lot of areas started having boil water warnings,” Fonger said.

“E Coli was found in the water, and I continued to write each step along the way while people were saying something was wrong with the water, making them sick and causing their hair to fall out.”

Over the two years he covered the complaints and the city’s approach to handling them, Fonger wrote over 250 articles detailing the accounts from the public and lack of responses.

“I think this story required a lot of work along the way by the press,” Fonger said. “We filed a number of FOIAs (freedom of information acts) as this story developed and important parts of this story related to who knew what in local, state and federal agencies that were involved only came out because those documents were requested by us or other newspapers.”

At the beginning of 2015, Fonger wrote about the city quietly sending out a notice to their water customers saying there was an elevated level of total trihalomethane (TTHM), a byproduct of chlorinated water.

Outside researchers from Virginia Tech stepped in and conducted their own tests, which showed rising amounts of lead in the water, a result the city’s own tests denied.

“We went through months of the city denying the truth,” Fonger said. “They were claiming their own tests were right, and the folks from Virginia Tech were coming to town pulling rabbits out of their hats telling lies.”

In the second half of 2015, a doctor from Hurley Medical Center in Flint showed the percentage of kids with lead in blood levels had had even tripled in some parts of the city, which propelled the situation to a national story.

“People started speaking out on it, from celebrities to presidential candidates, members of Congress and so on,” Fonger said. “I was just the one who was there writing about it as the screw driver turned each time. It was a little bit at a time, but we stayed on it.”

Now, the NMU graduate is treated like a celebrity and portrayed as a hero for blowing the lid off a crisis that’s evolved into a national outrage.

“Not a day goes by I’m not getting news releases from churches donating water, other groups giving amounts, General Motors donating millions of dollars,” Fonger said.

“I have gotten feedback from people saying my stories were overblown and its the city’s fault, not the state’s. I’ve had a lot of people reaching out for books, movies and podcasts, and others wanting me to go on their radio and T.V. shows to talk about it. Other than the small negative responses from the state, its been good overall.”

After reporting on the situation for over two years, Fonger said he believes multiple parties share the blame for the crisis that has just now come to light.

“There were people within the Flint government who didn’t have much power or authority who knew there were problems, and didn’t come to me or the public,” Fonger said. “To me, the state bears much of the responsibility, but also people from the city and the federal government were in a position to bring this forward and expedite getting the city off the Flint River, and they kept quiet.”