The truth about Columbus

‘‘In fourteen hundred ninety-two, Columbus sailed the ocean blue. He had three ships and left from Spain; he sailed through sunshine, wind and rain,’’ so begins the first verse of the poem “In 1492.”

In the United States, the classic narrative of Christopher Columbus is still taught to elementary school children, in spite of the fact that it’s filled with glaring historical inaccuracies that obfuscate the true story of the Italian man who sailed from Spain. After a perilous journey across the Atlantic, he landed in the Bahamas and proceeded to enslave the native population for gold. 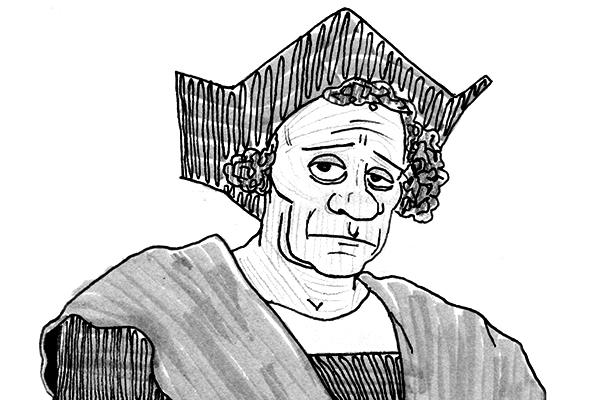 The Columbus Day concept, while celebrated for hundreds of years in this country, was officially made a federal holiday in 1937. Prior to the 1960s, historical thinking focused more on the doings of so-called great men and less on the gritty details.

It was a different time, and we don’t fault the schoolteachers of America for teaching what they thought to be true. In this day and age, however, with a plethora of information derived from Columbus’ personal records, it’s hard to make an excuse for why the old story is still being taught.

In 2004, the final installment in a collection of personal documents written by Columbus and other men who accompanied him on his voyages was published by UCLA. In it, detailed accounts of Spanish interactions with the natives Columbus’ men encountered are presented in gory detail, from rape to enslavement—even murder, as some natives were beheaded or thrown into vats of boiling soap.

Columbus himself had a native woman dragged naked into his cabin aboard his ship. When he attempted to rape her, she scratched him across the face. In his writings, he describes her as “having been brought up in a school of harlots.”

In cities across America, governments are making changes. Beginning with South Dakota in 1990, followed by Berkeley, Calif. in 1992, the day traditionally named for Columbus has been reinvented as Indigenous People’s Day in an effort to honor and remember the native people who were subjugated and exploited during the period of European exploration.

While NMU does not officially recognize Columbus Day, the Native American Students Association intends to bring a proposal to ASNMU this week to make the same change to the official calendar, which will pave the way for increased awareness and educational opportunities on campus.

The North Wind stands with the Native American Students Association and its proposal this week. Given our location in the Upper Peninsula, with such a rich Native American presence, it would be wrong to ignore that history in favor of a fallacy, especially considering we have had national holidays to honor other marginalized groups for a long time. The time to start talking about Native American issues on a broader scale is well past due.