The sky was gray, the air temperature hovering around 38 degrees. The snow was soggy, soft and slushy, and rain was pelting the ground—not exactly prime conditions for hitting the slopes.

Nonetheless, a group of ultra-dedicated winter sports enthusiasts came out Saturday evening for an alternate ski and snowboard event on the slopes of Marquette Mountain. The original event, the “Downtown Showdown Rail Jam,” was postponed until next year due to an unfavorable weekend forecast. 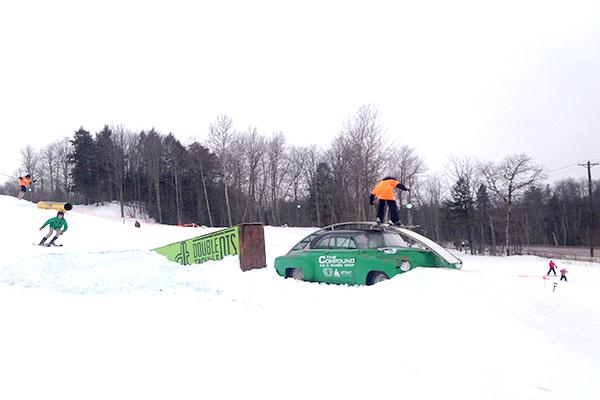 In its stead, the sponsors and volunteers decided to pull a fast one and plan a new event to take its place.

Brandon Croney, owner of The Compound ski and snowboard shop in South Marquette, was part of the effort to redirect into a new event.

“You always hope for the best a few days prior, but basically once we saw that it was going to be 33 degrees at night, we knew that meant the snow wasn’t going to hold up during the efforts we put in with all of our volunteer hours and machinery,” Croney said. “So instead of wasting that money and energy, we thought it would be best to postpone, but then came the light of a different idea.”

The “Marquette Mountain Double Down Compound Showdown” was the chosen name for the new event. It was set to begin at the same time as the original Showdown.

Rails originally designed for the downtown event were moved in and coupled with previously established rails at the Mountain to give skiers and snowboarders something new.

“We borrowed a few rails to change Marquette Mountain’s terrain park a little bit. It all worked out well,” Croney said. “It was nice to have already existing snow that was hard-packed.”

Though the decision to cancel was made only a couple of days before the event, there was a sense of “pulling together.”

“Right now, this is our way of making something out of nothing,” Croney said. “We’re just happy to be skiing today.”

Elliot Karafa, a Northern Michigan University alumnus and participant in the ski competition, said he’s happy the Rail Jam brings people out and gets them active.

“It’s definitely a bummer that it was cancelled downtown, but it’s a good turnout here on the hill. Too bad the weather didn’t cooperate,” Karafa said. “I love the environment—all of my homies coming out, riding together and having a good time.”

Croney said although the weather was less than ideal this time around, Mother Nature just “is what it is.”

One of the featured rails at this year’s event was titled “For Cody” in memory of Marquette resident Cody Revord who passed away last year after a snowboarding accident.

The rail symbolized the efforts of Revord’s family who raised money to advocate for wearing helmets while snowboarding.

Next year’s Downtown Showdown Rail Jam is planned to take place on Feb. 18 in the original location, on the 100 and 200 blocks of Front Street in downtown Marquette.