Parked on wet cement and surrounded by melting snowdrifts during an unusually warm February afternoon is a bright blue food truck—one that is hard to miss. A sugar skull logo dominates the side of the truck and a large array of bumper stickers covers the back. The words “Taco Mike” paired with a pink and purple bell is one design that catches the eye. Despite the brisk 20-degree air, customers touting frequent-buyer punch cards continue to venture toward the window. These are serious taco lovers; some are wearing only spring jackets in spite of the chill.

A man leans out of the taco truck’s side bay and yells out to the parking lot. “Joe!” A man steps forward out of the small crowd, a cigarette dangling from his mouth as he picks up his tinfoil-wrapped Mexican food off of the ledge. He exhales smoke as he asks the women behind the ledge for hot sauce. 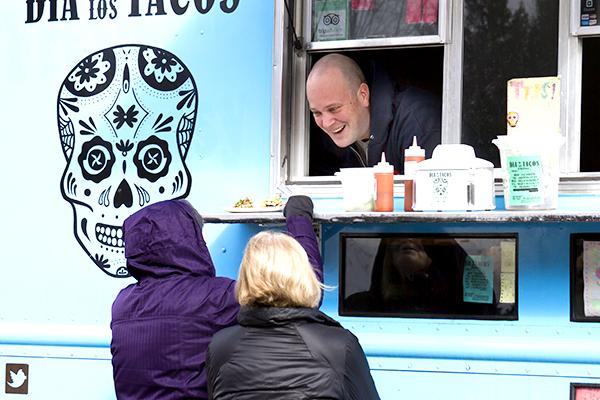 Mike Walker, owner of the bright blue food truck, mans the grill, crisping tortillas. The food prep area has a space heater, so a sweatshirt—emblazoned with the slogan “shop local, drink global”—is ample insulation for him.

A Marquette native, Walker has a connection to the town. After high school, Walker left for 20 years and spent time in bigger cities like Portland, Detroit and Ann Arbor. While there, he saw a boom in the food truck industry.

“I had just been in Portland for a few years, and out there it was just blowing up,” Walker said. “Of course the idea of doing it here was ridiculous because it’s so (expletive) cold six months out of the year. But I’m stubborn, and if there’s a challenge, I’m going to push against it and get it done.”

Dia de los Tacos began serving gluten-free Mexican food to Marquette patrons year-round in 2012. The food is prepared in a rented kitchen at the Marquette Women’s Center, or the “hub” as Walker defines it.

Inside the truck, food is kept warm using steam wells and a heated flat-top. Employees endure the colder days with winter boots, long johns and even hats and gloves.

Walker, previously the assistant manager at Marquette’s now-defunct Upfront & Company, has been in the restaurant business since he was 15 years old. Because of a natural distaste for desk jobs and business meetings, Walker was motivated to leave the world of traditional jobs. Thus the idea of the food truck was born and with money left to him by his grandmother, Walker decided to open his own business.

The first year, which happened to be the coldest winter in 60 years, proved to be the best opportunity for Walker to demonstrate he wasn’t going anywhere. It was important to establish the food truck as a reliable bite in town.

The truck serves five locations between Monday and Friday each week. The menu includes seven choices, ranging from the mild “Colleen” to the “Salma,” which includes Walker’s favorite ingredient: chorizo, a homemade Spanish-style sausage.

“It’s a recipe I’m proud of,” Walker said. Walker, a self-proclaimed “fantastical thinker,” is always dreaming of what the future will be for his business. He hopes to expand into a brick-and-mortar one day and provide his customers with an entire restaurant experience.

“I would love to provide a restroom, maybe even a plate now and then,” he said.

Lovers of Mike’s famous tacos don’t have to worry about the blue truck leaving town any time soon.