Before the women’s basketball team gears up for their fifth straight GLIAC tournament appearance next week, the ’Cats have a chance to sweep their rival Michigan Tech Huskies in the season finale Thursday night in Houghton for the first time in 19 years. 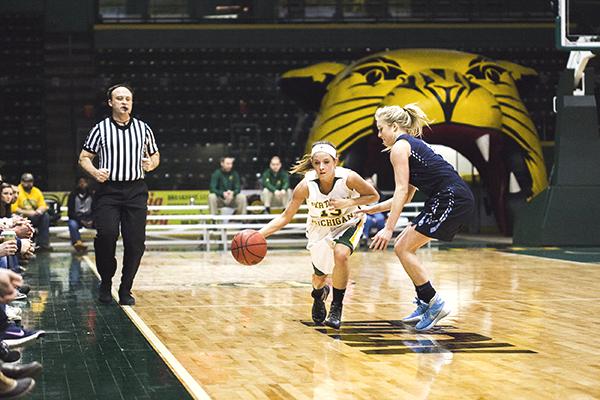 NMU upset the defending GLIAC champion Huskies 71-69 on a layup from junior guard Bre Gaspervich in the final seconds of the match on Feb. 1 at the Berry Events Center.

As the ’Cats head to Tech’s SDC Gym Thursday, they will be entering a place they haven’t won in since the 2009-10 season.

NMU head coach Troy Mattson said the trip will be a good experience for the Wildcats’ future.

“It’s not going to be an easy place to play,” Mattson said. “Tech’s going to have a chip on their shoulder honoring a few important players to their program on senior day. We need to combat a lot of things going up there, but it’s only going to help our maturation process and prepare us for the tournament.

“We’re going up to a very intense atmosphere, and if we handle it the right way, we will understand what it’s going to be like when we get into the tournament.”

While the matchup has the historical aspects to it, the game also has playoff implications riding for the ’Cats.

NMU’s 12-9 record has clinched them a tournament bid for a road matchup next Tuesday, which will either be against the No. 6-ranked and GLIAC-leading Ashland University Eagles or the second place Saginaw Valley Cardinals.

The Wildcats are tied for seventh place with Northwood University, who holds the tiebreaker with two wins over NMU. A Northwood loss to Lake Superior State Thursday with a Wildcat win would send the ’Cats to Saginaw, a team they upset on the road two weeks ago. But a Northwood win or NMU loss would send the Wildcats to the 20-1 Ashland who has not lost at home this season.

Mattson said that while beating the Huskies on their court would be great for the team’s momentum, he’s more focused on improving the team before the playoffs.

“It’s important to go into the tournament on a note that we’re still playing right now, and as of right now, we are,” Mattson said. “We’re confident going up there, and this is a winnable game for us. But playing well is more important than if we win or lose. We’re stressing the importance of continuing momentum so we give ourselves chances to win on the road in the tournament.”

The Huskies also have implications that will be decided by the outcome of Thursday as well. Currently, Tech is tied for second place in the GLIAC with Saginaw Valley at 16-5, just one game in front of Ohio Dominican and Walsh. The Huskies will be honoring their four seniors in the game, including forward Danielle Blake, whose average of 14 points and 8.3 rebounds per game leads her team.

“The Michigan Tech and NMU rival is one for the books,” Cameron said. “Records, streaks and strategies are tossed out and countered in every position. It’s always a great, competitive game where every possession matters. Defense, rebounding and pace of playing are going to be key.”

The ’Cats have seen emerging contribution from their freshman core, as freshman center Taylor Hodell is the team’s second scorer averaging 9.5 points and leads the team in rebounds with 5.9 per game.

Hodell said the freshmen now know what it takes to win against their biggest rival.

“We have to give it everything we have and leave it all on the floor,” Hodell said. “It’s a huge rivalry, so we have to play our hearts out like we did at home in the first match. We know what we can do now against them.”

Gaspervich is the team’s leading scorer in her third season, averaging 12.7 points per game. Gaspervich’s game-winning
layup against Tech earlier in the month capped a 21-point scoring night.

Mattson said the ’Cats will probably be without one of the team’s leading scorers in freshman guard Chloe Tompkins, who has missed time as of late due to injury. Mattson added Tompkins should return for the playoffs next week.

Gaspervich said her team needs to take their game to the next level to come out with a win Thursday.

“They’re going to come out hard at us after our first win against them,” Gaspervich said. “We need to stick to our play and go even harder. We don’t have much to lose, and we need to leave it all on the court.”