The Northern Michigan track and field team will travel to the Heminger Center in Tiffin, Ohio to compete in the GLIAC Indoor Championships. 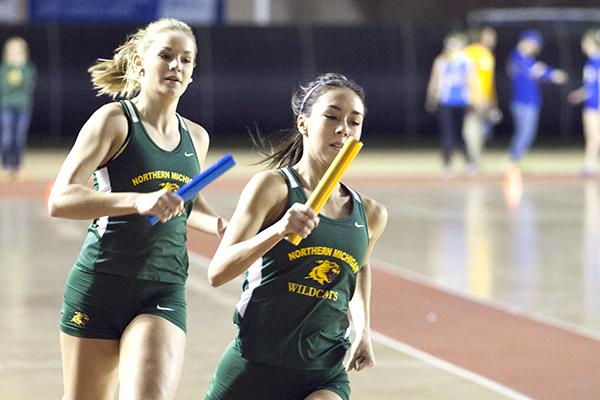 “Having five student-athletes receive the All-Academic award is very exciting for our program,” head coach Jenny Ryan said. “It is a testament to our hard work that these student athletes put in not only in their sport but also in their school work. It is great to see them honored for their accomplishment as that is one of our top team goals.”

The award is given to student-athletes who achieved a cumulative GPA of 3.25 and finished in the top half of the field at the NCAA Championships or in the top 30 percent at their regional championship meet.

The team was also named as an All-Academic team after earning a 3.57 GPA as a team last semester.

The Wildcats competed in The Big Meet on Friday, Feb. 12 and Saturday, Feb. 13 in Allendale, Mich. Junior Jasmine Williams set a NMU record in the weight throw with a distance of 59-4.

“The team did very well,” Ryan said. “We had many [personal records] and season best results. Williams set the school record in the weight throw, which also moved her up on the NCAA provisional
qualifying list.”

Freshman Michelle Juergen placed third in the long jump with a distance of 17-11.5

“It went very well for our team, and we had some really great performances,” Burmeister said. “I think it was definitely a successful meet, and it was exciting to see what each of us could do against some tough competition.”

The 4×400 relay team of senior Danielle Brzezinski, freshmen Paige Dutcher and Shayla Huebner and Becker timed in at 3:59.88 to take sixth in a field
of 20.

The Wildcats are training for the GLIAC Indoor Championships after a 10th place finish last season.

“We have been training and focusing on small things that we still need to work on before the GLIAC Championships,” Ryan said. “ We are tapering somewhat, getting rested up and sharp so that everyone is ready to compete at their highest level.”

Williams set a provisional qualifying mark in the shot put with a throw of 13.28m to finish ninth.

“We are all mentally preparing for this weekend by focusing on what we want to do in our event,” Burmeister said. “We’re going to continue to work hard in our practices leading up to the meet.”

The GLIAC Championship is the last indoor race before the NCAA Indoor Championships that start Thursday, March 10 in Pittsburg, Kan.

“The team has been moving up in every meet so far this year, and the indoor season has been great,” Ryan said. “We have many strong performances in almost every meet. The team has bonded well with a very positive atmosphere.”

Burmeister is optimistic about how the team’s indoor season is going.

“I think this season has been great for our team,” Burmeister said. “We are getting stronger each year, which is very exciting.”