‘Cats travel to No. 6-ranked Ashland to open playoffs 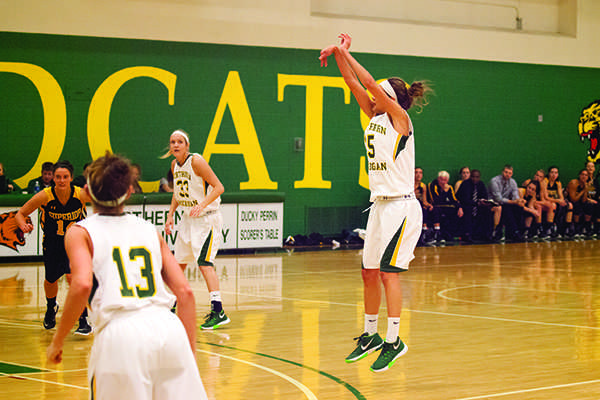 Gearing up for their fifth-straight GLIAC tournament appearance, the NMU women’s basketball team will travel to one of the nation’s top teams, the No. 6-ranked Ashland University Eagles.

Tipoff between the teams is scheduled for 5:30 p.m. on Tuesday, March 1 in Ashland, Ohio.

It will be the second matchup of the season between the teams, as Ashland took the first meeting 75-49 on Jan. 7 at their home court where they haven’t lost all season.

NMU head coach Troy Mattson said the Eagles will be a tall task for his ’Cats.

“Ashland is one of the best teams in the country, so it’s going to be a daunting task playing them on their court,” Mattson said. “We actually match up well with them and played them well for a half earlier this season before things fell apart on us. We need to compete hard and match their intensity.”

In the first matchup, the Wildcats kept up with the GLIAC’s regular-season champion in the first half, trailing 34-29 heading into the locker room. The game fell out of reach when the Eagles went on a 22-9 run in the third quarter to fly over the ’Cats.

NMU enters the playoffs as the eighth-seed and on a two-game losing streak, coming off their hardest defeat of the season in a 80-38 loss to the Michigan Tech Huskies on Feb. 27 in Houghton.

Mattson said despite the recent struggles, he maintains confidence in his team in another big game.

“I’m not too worried about what happened in the loss, we just need to get ready for the next game,” Mattson said. “We’ve been beaten hard a few times this year and have turned around to earn big wins the next night. We can bounce back.”

The Wildcats have suffered losses by 16 points or more and went on the win the following game five times this season.

Tompkins was second in team scoring before battling injuries the final months of the season.

For NMU’s senior forwards, Alyson Makovitch and Kendall Martenet, the playoff run will be the final games in a Wildcat uniform for the pair.

In NMU’s season finale against Tech, the Wildcats suffered a number of crucial injuries, as Gaspervich, Martenet and freshman guard Tess Weatherly each left the game and did not return.

Tompkins missed the finale to rest for the playoffs.

Mattson said after the game he expects all players to return against Ashland, and the team willl be ready for their challenge.

“We’re going down there to play hard and compete,” Mattson said. “We’ll get Tompkins back, and hopefully we won’t be too banged up after the Tech game. We need to play better than we did last week. We’ve competed all year long and have bounced back from some big losses, so I’m expecting the same at Ashland. We’re 0-0, and so is everybody else.”