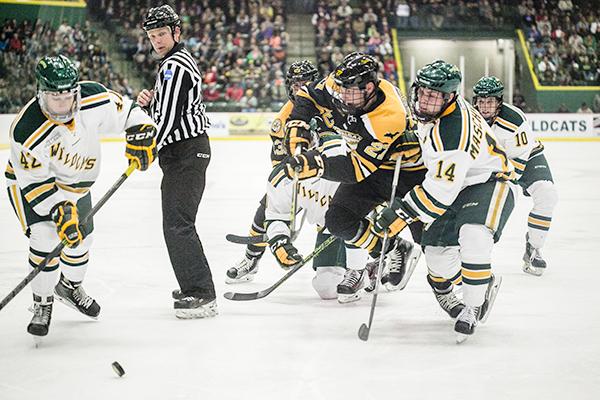 NMU’s playoff destiny lays in their own hands this weekend with a rivalry series that will determine where they’ll be playing the first round of the WCHA tournament.

And there may be no better opponent to end the season with everything on the line against for the Wildcats than the No. 17-ranked Michigan Tech Huskies.

Junior defenseman Brock Maschmeyer summed up the rivalry in one sentence: “We don’t like Tech, and they don’t like us.”

This weekend will be the second series between the two teams on the season. When the ’Cats and ’Dogs met back in October, both teams won their home match in the home-and-home weekend. NMU took the opening night with a 4-1 win on Oct. 4 at the Berry Events Center, than Tech returned the favor the following night with a 3-1 win in Houghton.

“My favorite part is that both communities are engaged,” Kyle said. “People care about the rivalry, and it’s a great tradition. It’s two small communities who have great pride in their universities and their hockey programs.”

NMU is 1-5 in their last six trips to Houghton, while Tech is 2-2-1 in Marquette their last five games.

The Wildcats enter their series with the Michigan Tech Huskies knowing as they sit in fifth place at 12-9-5 with 29 conference points, one-point ahead of Ferris State for the fourth and final playoff seed that hosts the opening round of the playoffs next weekend. A Wildcat sweep over their arch-rivals, or obtaining one more point than Ferris does over Lake Superior State this weekend will guarantee NMU their first playoff home game in four years.

Meanwhile, Michigan Tech enters the weekend with a 16-7-3 record that has earned them a national ranking. They sit in second place, two points behind Minnesota State-Mankato for first place. As Mankato hosts Bemidji State this weekend, Michigan Tech can win the regular season conference championship with a sweep over NMU and some help from Bemidji.

Petan said winning the battle of the U.P. has a lot of meaning to his team.

“For us our goal is to win the league, but to win against NMU is just as big,” Petan said. “Every point anyone can get in this league is huge, and that’s our goal.”

NMU’s offense has scoring threats of their own, with senior forward Darren Nowik who leads the conference in points with 30. His teammate, junior forward Dominik Shine is third with 29.

The Wildcat senior goaltender Mathias Dahlstrom will start the final weekend of his college career, and has posted a .925 save percentage and a 1.97 goals against average.

With the teams stacked with league leaders on both sides of the ice, Kyle said the rivalry series will be an entertaining way to end the regular season.

“They’re fighting for a championship, and we’re fighting for a good playoff spot as well,” Kyle said. “Both teams have proven they are pretty good hockey teams throughout the year, and this is going to be a great weekend of college hockey.”