The track and field team traveled to Tiffin, Ohio Feb. 27-28 to take on their foes at the GLIAC Indoor Championship, they are now preparing to compete in the upcoming NCAA Indoor Championships held in Pittsburg, Kan. next weekend. 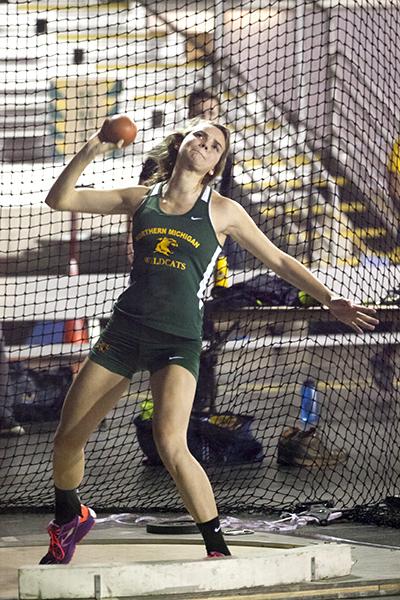 It was an overall successful weekend for the Wildcats compared to last year’s GLIAC Indoor where NMU placed tenth. This year, the ‘Cats made it to ninth place and managed to score more points across the board in different events.

Head coach Jenny Ryan was pleased with the team’s performance considering the team is fairly young and is excited to continue developing the athletes and making the team stronger as a whole.

“We definitely had some great performances from the athletes. We are in a very strong conference,” Ryan said. “It was a really good performance against those top teams.”

On the first competition day, four NMU athletes placed in the top 10 in individual events. The team managed to gain 12 points which put them in sixth place at the end of day one.

Junior Jasmine Williams took sixth in the weight throw and broke the NMU school record with the score  of 60-5 and overall increased her NCAA provisional mark. In the 5000-meter run, sophomore Kameron Burmeister finished in fifth with the time 17:38.62

In the pentathlon, freshman Michelle Juergen took sixth place, scoring 3,287 along with sophomore Ine Mylle who placed ninth with the score 3,155. Juergen made provisional marks in both shot put and high jump. She took first in the shot put (40-4.25) and tied for second in the high jump (5-6.50).

During the next day of the championships, Juergen won a bronze medal in the high jump, and the team altogether placed ninth with 23.50 points.

Mylle claimed fourth place in the triple jump with a distance of 37-11.50.  Freshman Shayla Huebner took eighth in the 400-meter dash with the time of 58:57.

Williams was the only Wildcat that qualified to compete in her first NCAA indoor championships March 10-12, so she will travel to Pittsburg, Kan. to represent Northern Michigan in the throwing competition.

“She is right in there with a lot of the top throwers,” Ryan said about Williams in the NCAA championships. “She has been working on her technique, still training, and improving every time.”

With the last shred of their indoor season out of the way, the Wildcats plan to use their break to hone their skills and prepare to return to the track for their outdoor season starting April 1 when the team will travel to Rock Island, Ill. to compete in the Augustana Viking Olympics.

“The indoor season really is pretty short, so a lot of it is preparing for the outdoor season,” Ryan said. “I see everybody will keep getting PR’s and hopefully breaking a few more records.”

The hopes for the rest of season that the coaching staff have are mutual with the athletes as they are eager to extend their performance into the outdoor season.

“I think our goals are to run faster, throw farther, jump farther, and to score as well as we did in the indoor conference as we did the outdoor conference,” sophomore Clara Churchill said.