College minors are victims to greed not weed

The current laws in Michigan are unjust for treating the youth as criminals for minor in possession (MIP) charges and possession of marijuana charges.

If a minor is caught with possession of alcohol, they can be fined up to $500 and receive 90 days in jail, and the offenses for marijuana possession can be even more challenging for defendants. 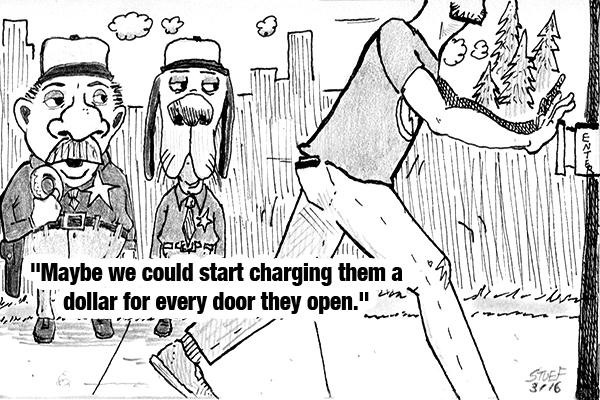 According to an article by the Detroit Free Press, 38,499 people under 21 were arrested for some sort of minor in possession charge from 2009 to 2013 and counties with college towns racked up some of the biggest numbers, including Marquette, where hundreds of MIPs are issued every year to students attending NMU.

Just about every student at Northern knows someone who has been negatively affected by these unfair laws. I was personally given an MIP earlier this year when stopped by Marquette police officers for walking down the street late at night.

Even though I wasn’t causing danger to anyone, they issued me a ticket for minor in possession with a court date scheduled a week later. Eventually I was fined $400 and forced to attend an alcohol awareness class run through NMU, which I had to pay for out of pocket.

Another Northern student was given an MIP for less than a gram of marijuana. He was later issued a $1500 fine, a suspended license for 6 months and 12 months of probation.

In a similar article published by WILX-10, attorney Mike Nichols of Nichols Law Firm, said most kids are misinformed about their rights when stopped for an MIP.

“Intimidated. Misinformed. Pushed with their backs up against the wall. And I get it, you know, we’re trying to teach kids about alcohol use and the right relationship with alcohol at an early age. But we’re taking away from that message, we’re distracting from the message.”

MIP charges are an easy way for counties with a large college demographic to justify making money off students. Most of the charges in Marquette County are given to college students, many of which are drinking responsibly or using marijuana without causing harm to others. It’s completely unnecessary for police to stop someone who is not causing harm to themselves or anyone else.

Luckily some Michigan senators are pushing legislation that aims to reduce MIP charges for young adults and limit the state’s power to serve them.

“As a former sheriff, I take underage drinking seriously, but the problem now is that a student makes a mistake with a can of beer and ends up with a criminal record that will follow them for the rest of their life,” said Senator Rick Jones.

Jones’ bill will effectively make an MIP a civil fine, instead of allowing the courts to have the decision of making it follow minors on their permanent criminal record.

Jones adds to his reasoning saying, “the current MIP  law is clogging up our courts, putting kids in jail and giving young people a criminal record that can hurt their ability to get into college or get a job. This reform is an example of smarter justice.”

I would go further than what Senator Jones says about MIPs and argue that it isn’t a mistake that the students are making. The decision to have a few beers is not a mistake as long as it is handled responsibly.

It is an unsuccessful and unjust prohibition on minors that only results in taking money away from the youth, many of which happen to be college students.

To those who have received an MIP or possession of marijuana charge. Charlie Chaplin in “The Great Dictator” said, “the misery that is now upon us is but the passing of greed—the bitterness of men who fear the way of human progress.

The hate of men will pass and the power they took from the people will return to the people. And so long as men die, liberty will never perish.”