HIS House Heads to Mexico for Spring Break

Stray dogs roamed the sandy streets. Garbage tumbled like weeds in the wind as far as the eye could see. We passed old tires, half-finished cinderblock dwellings and dead dogs untouched, baking in the sun.

This was the right neighborhood—our destination. 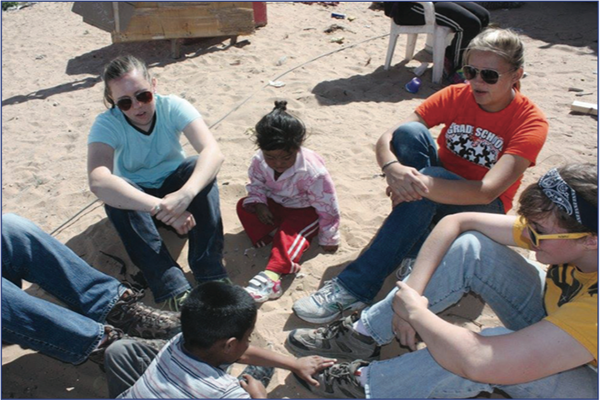 This spring break, a group of us NMU students with His House Christian Fellowship went to Juárez, Mexico and built a home for a local family in need with the missionary organization Casas por Cristo (Houses for Christ).

Casas por Cristo (CPC), established in 1993, facilitates teams who build homes in Mexico, Guatemala and the Dominican Republic. Teams pay for building supplies, and CPC missionaries guide them through construction. Each member of our group paid $650 for materials, travel expenses and other costs.

“This was my first mission trip,” Dan Hunter, a sophomore in construction management, said. “I wanted to grow. I wanted to experience religion outside our country and my comfort zone, as well as to build the house.”

On Feb. 26, the His House team crammed into a rented 15-passenger van and a car and drove over 1,750 miles and 33 hours, one way, from Marquette to Juárez, a city situated on the border with El Paso and known for its now declining crime rate.

There were 15 in our group: nine NMU students, two other friends, a student’s sister, two campus ministers and a His House intern. As NMU His House did the same mission trip for spring break 2015, this was the second time for six of our members.

“I came on this trip to help other people physically and spiritually,” Adam Steinhauer, senior mechanical engineering and technology major, said.

Now on his second year, Steinhauer observed, “It’s been cool to see how the community has changed over the past year and the improvements to Juárez itself.”Still, this was a low income neighborhood in Juárez. We met the family: Saúl, 30, his pregnant wife Alondra, 20, their six-year-old Cristián, four-year-old Vicky and one-year-old Saúlito. Their growing family of five had been living in a one room shack made from the rubbish Saúl could scavenge. Somehow they had survived a foot of snow that winter.

The family was smiling, a bit shy. I was glad for those with us whose Spanish was better than mine. They served as translators for the rest of us. We built on the land they owned beside their shack. We joined in prayer with the family at the beginning and end of each work day, speaking in English and Spanish.

On the first day, we poured the cement foundation, cut the boards and hammered together most of the walls. We rested each night on the floor of a nearby church, showered and cooked our meals there.The second day consisted of putting up walls, nailing the black board and attaching the roof, along with insulation, doors and windows, electrical work and wrapping the outside walls with chicken wire.

The children quickly warmed up to us, and we played games with them between jobs on the site. The third day, we put in drywall, finished the roof and covered the chicken wire with stucco. As we worked, the wind intensified, filling our eyes and mouths with dust. But finally, we finished. The new house was 22 feet by 11 feet and had two rooms.

The last day was a dedication ceremony. Saúl hammered the final nail. Then we gave the family the keys to their new house. A local pastor explained to the family that we had given them this house as an expression of God’s love for them. It was a gift, incomparable with the gift of grace through Jesus Christ, he said. Then Saúl and Alondra made a public confession of their faith.

“My favorite moment was seeing the keys handed over to the family and the whole dedication ceremony [for the house],” Hunter said. “The family gave their lives over to Christ again.”

In tears, Alondra said in Spanish how she couldn’t believe that we came and built a house for them. She said it was a dream come true, and she would now have a place to raise her family. She said she was very emotional but extremely happy.

We gave kitchenware to the family, school supplies for the kids, other gifts and two Bibles signed by the team. Then the family honored us with an authentic lunch of tacos and enchiladas (we asked for the recipe).

“I love the ministry,” Gail Andrews, human resources manager for CPC and the missionary guide for our group, said. “I love the combination of partnering with local pastors, having people from the community investing in their well being. This week is something [the group] won’t ever forget.”