This season, NMU hockey and football are showing the lowest average per home game attendance numbers in the last 10 years, according to the department of athletics attendance records. 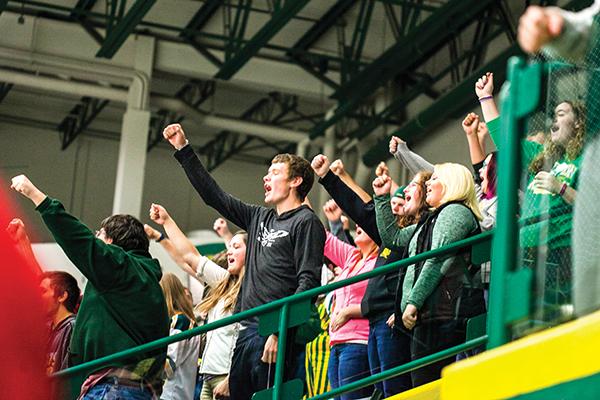 Athletic Director Forrest Karr explained that the flux in attendance numbers over the past 10 years could to be attributed to a variety of factors.

“High attendance is often correlated with winning seasons,” Karr said. “But I think there’s more to it than just winning and losing.”

Karr said the decline in athletic event attendance is part of a national trend. Articles in such publications as USA Today and Inside Higher Ed reinforce these statements. Both, and other, articles on the topic discuss declining attendance, especially from students, at intercollegiate sporting events and in particular football games. A 2014 article from Inside Higher Ed cited a Wall Street Journal analysis done at 50 public colleges with major football programs that showed student attendance down 7 percent from 2009.

“People just have a lot of options and are really busy,” Karr said. “They have a lot of things competing for their time and attention and disposable income, and we’re just one of those things, so we do our best to provide a good product and hope that people see value in it.”

“I think the logo change will help reinvigorate and re-engage people,” Hall said.

The highest average per home game attendance for the NMU hockey program in the past 10 years was during the 2009-10 season, which was the last time the team qualified for the NCAA tournament, according to attendance records. The average that season was 3,033 fans per home game. The Berry Events Center has a seating capacity of 3,800 as well as 16 luxury boxes and standing room for 400 more fans.

From 2006 to 2013, the hockey attendance numbers hovered consistently close to 2,800, but for the following three seasons, these attendance numbers dropped to hover near 2,200. Karr said this could have been caused by the conference realignment from CCHA to WCHA hockey.

“We used to have schools with name recognition like the University of Michigan, Michigan State, Notre Dame and Ohio State come to the U.P. to play Northern,” Karr said. “Now we play those schools on the road.”

Though the football team has also shown a low average home game attendance this season, the attendance numbers for football consistently beat those of hockey. Karr attributed this to the fact that the football program has been around since 1904, while the hockey program was not started until 1976.

“There is a long proud history with the football program, a long history of success and good teams, and there’s a lot of people in the community that support the program and have supported it for decades,” Karr said. “There’s a very loyal following of people that come out. I think these numbers could grow if the team has winning seasons in the next couple of years.”

The NMU athletic attendance records showed that the highest average attendance per home game for football occurred in the 2008-09 season with an average of 4,273 fans per home game. Karr said this was the year that saw 8,672 fans attend the nationally televised home football game against Michigan Tech University. The Superior Dome has a seating capacity of 8,000 people.

This year, a greater variety of food was offered at events in addition to the serving of wine and beer at the Superior Dome and the Berry Events Center in an effort aimed at enhancing fans’ experience at NMU athletic events. Lake Superior State University and Michigan Tech University have also begun serving wine and beer at sporting events this year. This change is a result of concession management moving from the athletic department to Simply Superior, the conference and catering service on campus. The switch was prompted by athletic event survey results and took the task to an organization more qualified to handle such entertainment.

“What we [athletic department] specialize in is putting on athletic events and helping our student athletes progress toward their degrees, and they [Simply Superior] are experts in entertainment and food and beverage,” Karr said.

“From the department of athletics’ perspective, I thought it really made the environment better for fans, and we really didn’t have any problems that can be attributed to alcohol sales,” Karr said. “The feedback we received was extremely positive. As long as our fans are getting more from the experience than what they were before, then I think it’s a positive step in the right direction.”

The athletic department continues to work hard toward putting a good product and team on the ice, the court or the field, Karr said, but regardless of the outcome of a game, another goal of the department is to give fans a positive experience.

“We’re cognizant of the fact that fans have other options for things to do, and that’s part of why attendance nationally at intercollegiate sports has gone down across the board in all sports throughout the country year after year,” Karr said. “When they come, we need to be aware that they are choosing to spend hard earned dollars to come to a game. We want the fans to really enjoy their experience and hope that helps to bring them back.”