Marquette bingo shop evokes the past

A ticking clock breaks the silence in perfect repetition while the display room of the Bingo Shop on Washington Street sits ever-so-quietly. The shelves on the walls are lined with row after row of bingo daubers in varying colors and sheens, and in the back room, vintage pull tab gaming machines sit idle, gathering dust. 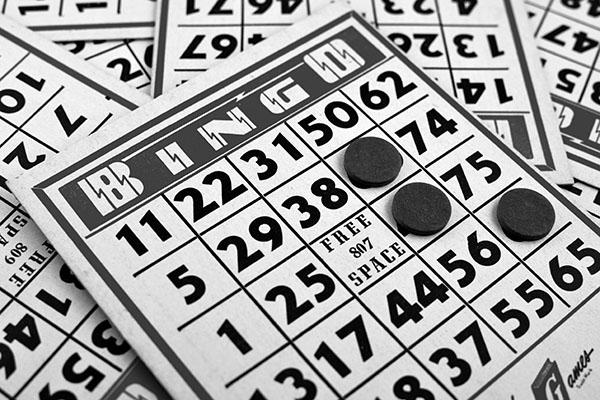 You can feel the sense of a “day gone by” in this space, a day when bingo was the talk of the town and was a gathering essential in most community groups, be they churches, rotary clubs or school groups.  Jim Higgins, owner of Higgins’ Bingo Supply in downtown Marquette, remembers such a time.

Higgins’ parents, John and Diana, got the vision for the business from realizing the sheer amount of bingo community events that existed back in the late ‘70s and early ‘80s.

“When we were in grade school at St. Michaels, my parents worked the bingo games there,” Higgins said. “Eventually they took it over and ended up handling the American Legion’s bingo nights as well.”

Higgins’ father worked a full-time job as a sales manager for Firestone Tire Co., and when he retired, he started Higgins’ Bingo Supply. At that time, there were only two bingo suppliers in all of Michigan, both over 450 miles away. So he saw the opportunity, and he took it.

“He went around and got everybody’s bingo business in all of the U.P.,” Higgins said of his father.

Jim worked for his parents’ shop throughout high school and college and later picked up his tools as a carpenter for 10 years. His dad then offered him ownership of the thriving business.

“I took it up 24 years ago with no real passion for bingo. Back then it was a good deal for me,” Higgins said.

The bingo business has declined over the past decade, but that doesn’t mean that the establishment hasn’t had its fair share of excitement.

Higgins said that back some years ago the rock band REO Speedwagon came through Marquette. When they passed the bingo supply shop, the lead singer ordered the tour bus to turn around and go back. He ended up buying bingo supplies for his mom and taking pictures with Higgins’ father. “It was fun,” Higgins said. “It kind of put us on the map.”

Before the idea for the bingo supply shop was conceived, the building had been in Higgins’ family since its construction by his great-grandfather in 1882. The storefront went from being a bar to a barbershop to a bookstore.

“It’s had a great many uses over the years. Back at the beginning, this shop was on the outskirts of town, the ‘boonies’ if you will,” Higgins joked.

The bingo business has “just been hanging on” the past couple of years, but Higgins still hopes for a resurgence of interest in bingo.

“The way business is going, I’m not even sure it will be around very much longer. Even your senior citizens and retirees are biking and kayaking instead of going bowling or going to bingo,” Higgins said grimly. “I guess time will tell.”