All tenured NMU faculty employed for a minimum of 10 years were recently sent an early retirement incentive plan that reaches out to departments and disciplines targeted for full-time-equated (FTE) teaching faculty reduction.

This Limited Voluntary Buyout Incentive Plan For Certain Academic Disciplines/Courses provides FTE teaching faculty with incentive for early retirement, offering 100 percent of a single year of current annual base salary, minus appropriate withholdings, to be paid in four equal payments over the course of no more than two years. 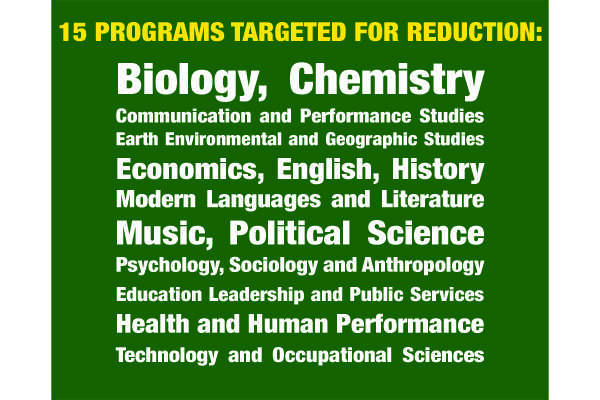 Plan participation may be delayed by one academic year based on program need. Participants who are delayed will be provided 50 percent of a single year of current annual base salary after the year in which separation occurs, to be paid in two equal payments if they still chose to take the plan.

This incentive plan is being offered in response to the declining enrollment faced by NMU over the past six years, said Dale Kapla, assistant provost for undergraduate programing and faculty affairs.

These departments were determined based on calculations made in a study conducted on the increase and decrease in department demand for student credit hours (SCHs) over the past five years, Kapla said. In departments that have declined, SCHs were compared to the number of FTE teaching faculty to determine the faculty needed to cover student demand.

The university is not going to get into a situation where it does not have enough qualified faculty to fulfill its contract with students, Kapla said.

“We understand that we have to deliver a curriculum; that’s our first priority, to have the best people in front of our students,” Kapla said.

The Provost and Vice President of Academic Affairs Kerri Schuiling,  in collaboration with the deans who oversee departments facing reduction, will review staff applications and select employees for the plan based on eligibility and department need. Applicants may be denied if it is determined that their acceptance could negatively affect academic programs or the employee possesses needed experience or expertise.

“We need to think about what’s happening two or three years from now,” Kapla said. “There are departments that are growing and faculty that want to create new programs, and we certainly do not want to hurt that.”

If employees want to retract the supplemental release form, they are given a seven day period to do so, Director of Human Resources Rhea Dever said. At this stage it is impossible to guess how many employees will respond to this plan.

“It’s a very personal decision for people from a financial standpoint too,” Dever said. “It’s hard to know whether individuals feel like, financially, they are in a situation where they think they can take the plan, and that they are ready emotionally to detach from their teaching experience and from Northern.”

Tenured faculty who have served a minimum of 10 years in departments that are not targeted for reduction were also sent this plan, giving all faculty the chance to apply. Schuiling, in collaboration with the department dean, will determine if these applicants are eligible by examining expected cost savings and department need.

A similar plan was offered two years ago titled the Early Retirement Incentive Plan ERIP, resulting in a reduction of 36 FTE teaching faculty throughout multiple departments.

After the ERIP only about half of the positions were replaced, said President of the AAUP Rebecca Mead. The ERIP was designed in collaboration with the AAUP, a process in which the administration signed an agreement with the union outlining agreed upon terms in full compliance with labor law, she said.

The recent faculty buyout plan has not had the same collaboration between the AAUP and administration and no agreement has been signed by the union accepting terms, Mead said.

“We don’t think it’s the best plan in the world, but that would be for individuals to decide if they are in a position to take it,” Mead said.

Because no form was signed, the AAUP cannot officially endorse, agree with, or accept this proposal, Mead said. The AAUP will not be offering legal advice on this plan.

“We had no agreement,” said Mead. “We are just trying to get people as much information as possible to make an informed decision.”