Terrorism has a global impact

In the wake of last week’s terror attack in Brussels, Americans and Europeans joined together in solidarity. They changed their Facebook profile photos, checked in to let friends and family know they were okay and wrote drawn out analyses denouncing anything and everything as the root cause of Islamic terrorism. 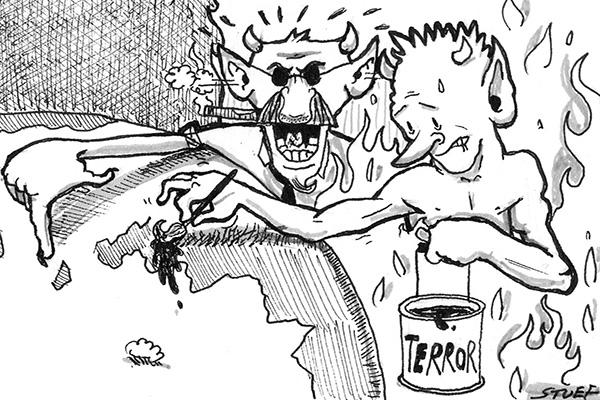 Just days prior, a car bomb killed 36 people and injured over 100 in Ankara, Turkey. A similar bombing in Beirut, Lebanon killed 43 and injured 200 the same week as the Paris attacks last November. In the case of Paris and Brussels, the aftermath of each attack was punctuated with non-stop coverage by the news media, interspersed with grainy enlarged photographs of deranged looking suspects. For Ankara and Beirut, a short article buried at the bottom of the day’s news, right next to “10 sweet tricks to lower your belly fat.”

Today, one common thread is becoming apparent: In the realm of terrorism, western audiences are only concerned when western people are affected. This argument is by no means meant to trivialize terrorist attacks but the sad reality is most people carry on completely unaware of what’s going on in their world because of bias and underreporting.

In Lebanon, there were at least 200 terrorist attacks in 2014 alone, according to the Global Terrorism Database. In Kenya, there were over 100. In Nigeria, Boko Haram reportedly massacred 2,000 people in terrorist attacks throughout 2015. The disparity in coverage between the western and non-western terror events is astounding. Case in point: when the Charlie Hebdo attacks hit Paris, 22,000 articles were written in the ensuing weeks, but a suicide bombing in Yemen that same day received only 565.

The excuse so often used in defense of media bias is the old analogy of ‘dog bites man vs. man bites dog,’ wherein one is shocking and the other is not. As we’ve seen above, terrorist attacks happen almost every week in parts of the Middle East and Africa.

By the dog vs. man analogy, they wouldn’t be newsworthy, but that’s missing the point entirely. If the average person cannot get a balanced interpretation of world events, they cannot interpret the world’s problems in a balanced manner. While daily news coverage of terrorism would be hard to stomach, it might be the only way to energize our society to act, in whatever way they can, to help put a stop to the global scourge of fear.