The schedule is set and the roster is getting full with players from around the country and the world. The new men’s soccer team is taking shape and embarking on their inaugural season at Northern Michigan University. Head coach David Poggi said his hope for the fall is that the team is healthy and as excited as he is about the season.

Poggi has recruited athletes from across the country and three from European countries. Being the sole recruiter for the team, he has gotten a sense of each player as an athlete and as a person. 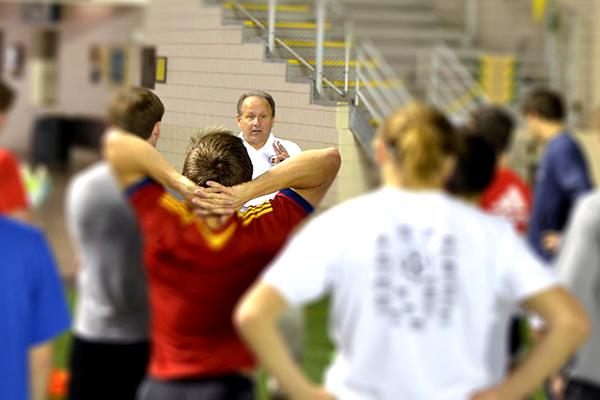 “Leadership is really important in everything,” Poggi said. “When you’re playing a team sport, it’s even more important because the dynamics between individuals are played out on the field.”

Yet it could be beneficial for the team, he said. Everyone will be at the same level and comfortable to reveal their leadership qualities. It will create a strong foundation for the team to grow in the following years, he added.

Poggi brings 30 years of soccer coaching experience, coaching at the professional, collegiate and club levels. He created the Division I University of Louisiana-Layfette women’s soccer team from scratch, coaching the team for six years. Poggi has coached professionally in the United States, Brazil and Denmark, leading teams to both regular and post-season titles.

“[Professional soccer] is a little bit different than outdoor, but it’s not different than [other] team sports,” Poggi said. “It’s both player management and being able to develop an identity of a team.”

With a projected roster size of 28 to 30 players, there will be a full-time staff to assist in coaching. In sports, the coach-player ratio is looked at as the student-teacher ratio is in academics. Poggi said staff are important to help develop the players that are brought in.

“Watching [the players] go through the process is exciting for me,” Poggi said. “They’ll score the first goal, win the first game in the history of the program.”