Wildcat Willy may be NMU’s mascot, but who really represents the university? Ask any athlete, local or NMU sports fanatic, and you’re going to get a description of two goofy knuckleheads wearing green and gold wigs. Their names are Todd “Stix” Honch and Lindsay Griffith.

You may also know them as NMU’s super fans from their nearly perfect attendance record at all sporting events. Whether they’re hollering at the football games or chest bumping for every point scored at the volleyball games, no matter who you are or what sport you play, everybody knows this dynamic fan duo. 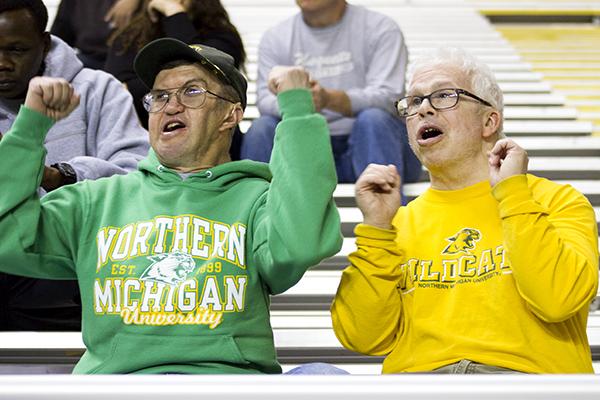 As an athlete myself, Stix and Lindsay have had such a huge impact on my life. So I wanted to answer the question everyone has been wondering: who are the men behind the crazy wigs, and how did they become NMU athletics’ biggest fans?

“When I looked at him, I knew this was going to be trouble,” Stix said, laughing. “Now we are known as double trouble.”

It all goes back to 1987, when they were both attending an NMU basketball game at the Hedgcock Field House. Stix was jamming in the pep band when Lindsay walked up and introduced
himself.

“We have been die-hard Wildcat fans way before we met though,” Lindsay said.

Stix moved from Flint, Michigan in 1987, and in 1988 he enrolled at NMU, where he was the star drummer for over a decade.

“That’s how I got my nickname ‘Stix’ because I’m a rockstar on the drums,” he said.

Lindsay was also born downstate in Lansing, Michigan. A year after his birth, his parents, Thomas and Gail Griffith, were offered jobs teaching chemistry at NMU. When his family originally made the move, they planned on living in Marquette for only two to three years but, like most, fell in love with the area and ended up staying through retirement in 1994. Lindsay has now been an active resident of Marquette for over 50 years.

So what keeps them coming back year after year to every game?

“We just love rooting for all the teams, no matter who is playing we are going to be there, because we love it,” Stix said.

It isn’t just the loud crazy environment that draws them to every game. It is also the friendships they develop that make it so special.

“It is so cool walking around and having the athletes say hi and how they can’t wait to see me at the games,” Lindsay said. “They know us and they count on us to be there. How cool is that?”

As much as it means to them when athletes say hi, it means even more to us as players to have fans as amazing as they are. Whether they are traveling eight hours downstate to see the hockey team play in Detroit or waking up early on a Saturday to cheer on the women’s basketball team, they make being an NMU athlete fun.

I can personally attest to this. Coming in last year as a redshirt freshman, no one knew who I was at games, but to Stix and Lindsay it didn’t matter. They would walk up and give me a fist bump after big wins or encouraging words after tough losses. As our friendship developed over the past year, we have managed to create a sweet handshake and a multitude of inside jokes. I just hope that after this column not only does the community learn something new about these two goofballs, but more importantly Stix and Lindsay realize how much we as athletes love and appreciate them.

They are NMU’s greatest fans, biggest trouble makers and two of my best friends. They represent everything this university stands for: no matter who you are or where you come from, you can always find your home here at Northern Michigan.