A six-wing housing facility expected to be completed by summer of 2018, will replace what is currently the Quad One dormitories. Plans for the new facilities construction have been emerging since the NMU Board of Trustees approved a resolution to move forward with Tennessee based national collegiate housing developer and manager EdR in April. 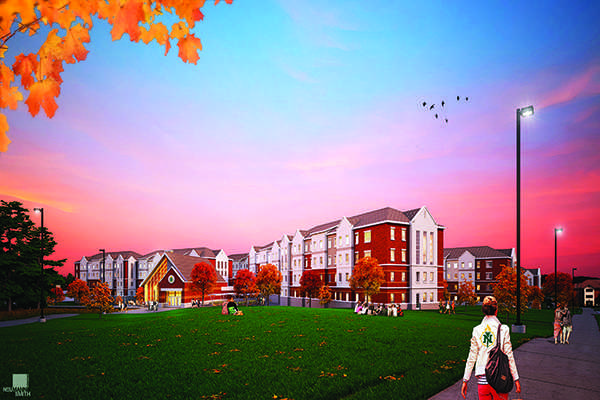 “The project will be approximately $80 million,” said Kathy Richards, vice president of engineering and planning/facilities at Northern.

“EdR will be funding all but $3.97 million that NMU will contribute towards the building connectors and living/learning meeting space.”

NMU will collect rent, own the land, building and contents of the building. A percentage of rent collected by NMU will go to EdR, said Richards. At the end of the 75-year lease the building will be returned to NMU in the same condition in which it was built. The property will be tax free because the university owns the land, building and contents, she said. As contracts are negotiated, NMU engineering and planning will work closely with EdR on design, talking with architects and representatives from EdR every day, Associate Director of Engineering and Planning Jim Thams said.

“The designer is involved, EdR’s involved, the university is involved so we collaborate with them regularly. There’s no way to pull off a project like this without doing it so we’re heavily involved in the new design.”

The decision to completely rebuild these housing facilities was made because Quad One units were built in the late ’60s using a masonry structure that does not allow much room for upgrade, said Thams. Along with the cost of maintenance, there were limitations on dorm form and ceiling height, with no way to introduce an air filtration system.

The new housing facility will also be handicap accessible, including two classrooms, an outdoor activity space and a fire pit closely located to both the Marketplace and the Academic Mall, Thams said. This will make the housing facility more accessible to commuter students. “So at the end of the day the lodge, with the amenities and services it provides, gives students places to go,” said Thams.

“I envision it to be very similar to the lounge areas in the informal learning areas in Jamrich.” The plan for construction of this new housing facility was to construct buildings in pairs. This meant that the building could only be built in a certain area, overlapping parts of the native plant studies site, said Thams.

“What happened with the layout of the building was, to properly sequence construction, meaning being able to start in a certain location and deliver each one of these six buildings in pairs and hit the semester start time for fall 2017, winter 2018, fall 2018, to hit these meant that we had to move the whole complex south. That’s when we impacted the native plants area,” Thams said.

Before the end of the semester Engineering and Planning started working with the EEGS (Earth, Environmental and Geographical Sciences) department on a plan to relocate plants that are at risk, Thams said. The retention pond will be reshaped and reworked, but will be put back. Plans to build over what is currently the native plant site sparked controversy at the end of the past winter semester. The site has been home to plants and pollinators native to the region since 2006.

After the original plan for the new dorm location was released both students and faculty protested, filling forums and a town hall meeting with the president. Since the finalization of the plans, EEGS department employees, Marquette conservation district volunteers, volunteers from the general public, and volunteers from the hoop house have been helping relocate at risk plants as part of a restoration project for the area.

Students and volunteers have been moving plants from the impacted area into places that are hopefully safe zones, watering plants and moving them from the wetland area, Cassandra Prchlik, senior environmental science and sustainability major, said. Prchlik is back working on the native plants study area for a second year as an environmental science technician.

“The area itself was kind of a student idea, so it’s nice to see a student’s idea being utilized by the university,” Prchlik said. “It’s nice to see something get used that’s on campus and nearby for students.”

The state of the native plant site right now, while adjusting to more continuous areas, speaks a lot to ecological fragmentation so we would like to encourage students to be patient, Prchlik said. The EEGS department has been working closely with other groups, utilizing areas previously belonging to the Native American studies department for plants that will be displaced from the new housing facilities.

“I don’t think it was a compromise, it was more of a, ‘We’re doing this, please move on.’”