Costs rise with the new semester

Students returning to NMU this year are dealing with a new tuition structure in addition to a fresh load of classes to worry about. 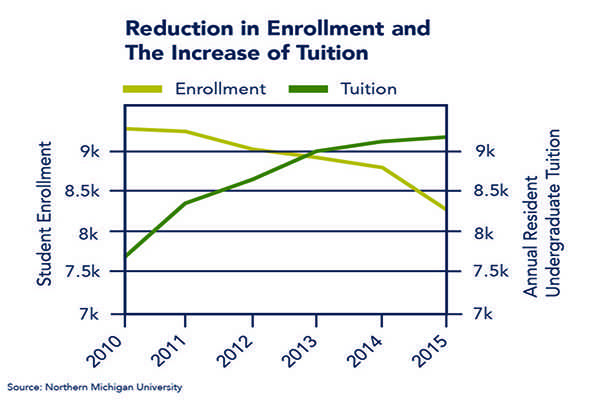 During the summer of the 2016-17 academic school year, Northern underwent changes in tuition and fees based on decisions made by the Strategic Budget and Planning Advisory Committee, which was created last spring.

The tuition and fee model NMU had utilized for years was assessed by the committee in June, along with the Board of Trustees and President Fritz Erickson. It was then determined that in order to bring down the budget deficit NMU has been experiencing due to declining enrollment and other financial woes, tuition and other certain operational fees had to be restructured.

“This idea of ‘Distinctly Northern’ puts us in the position where we should be willing to take risks, to try new things, to really engage and go big and bold on ideas,” he said.

One of the major changes is differential tuition rates for upper and lower division students. After earning 56 credit hours or more, students will be considered upper division students and can expect to pay more for their courses.
In addition, newly modified course fees range from a $5 increase to a $50 increase and are determined by the academic areas that have higher associative costs than others.

“What we tried to do was look at fees to pay for the things that were more expensive and so one of the reasons we went to an upper division tuition differential was because our upper division courses cost more,” Erickson said in an interview Friday morning.

“They tend to be more lab-oriented. They tend to be much smaller and so the idea was to try and get the costs of the students more directly associated with the classes they’re taking.”

Additionally, the cap on flat-rate tuition has been lowered from 18 to 16 credits, meaning students who choose to enroll in more than 16 credit hours per semester will be expected to pay a higher amount of tuition than those who choose to stay at or below the 16 credit cap.

Recreational passes for access to the PEIF will also now be added to every student’s tuition and fees before the semester begins, with an option to refund the fee for students who wish to opt out.

Other expected changes to NMU’s budget will involve a reduction plan that will span across at least five different divisions on campus.

On Thursday, the Strategic Planning and Budgeting Advisory Committee, which is made up of 45
members appointed by Erickson,
reviewed budget-reduction proposals from the five university divisions that are expected to meet the university’s overall reduction plan of $3 million.

“We need to have decision making in the hands of the people who directly influence the students,”
Erickson said in his convocation.

At the Fall Convocation, Erickson also mentioned that the Strategic Planning and Budgeting
Advisory Committee is working on a preliminary 5-year strategic implementation enrollment plan because demographic decline of traditional-aged college students continues to be an issue.

“Northern continues to remain the second most affordable university in the state and while we don’t want to raise tuition, we still want to maintain quality cutting edge programs,” said Dale Kapla, associate provost for undergraduate programming and faculty affairs.

“You’re going to hear about, over the course of this year, some other academic programs that are really innovative and that are really going to attract more students and be what students want to have in an educational experience,” Kapla said.

“Even in times of lower enrollment, we’re going to weather the storm,” he added. “And we’re going to have a couple years where we hope enrollment numbers kick up, but you’re going to see some neat stuff coming up and I think that bodes well for our future.”