Five days after former NMU hockey players gathered for a reunion in Marquette, one lost their life to a car crash. 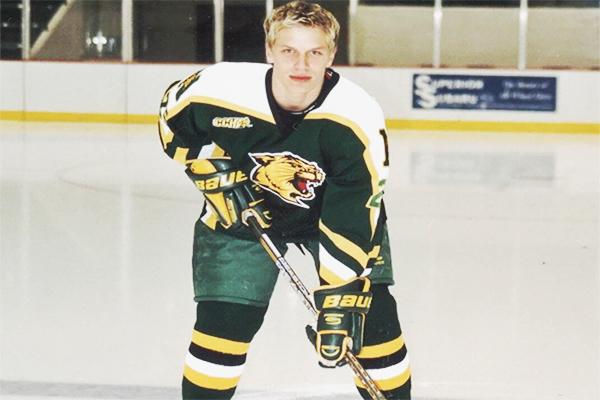 Kyle said his relationship started out as a coach-player relationship but over the years it grew into a friendship.

Negaunee isn’t a prominant hockey town but Kinnunen had a dream of being a hockey player and he found a way to do that Kyle said.

“He worked hard,” Kyle said. “He competed and wound up playing some junior hockey and then coming to Northern and realizing his dream of playing Division I hockey.”

Kinnunen played at NMU between 2000-2004 and Kyle praised him as a quiet, humble kid that didn’t need accolades to be confident.

“As a player he was a really fierce competitor,” Kyle said. “A real tough kid. He won his battles and would do anything for the team to win.”

In addition to his success on the ice, Kyle said Kinnunen was the kind of guy to bring a team together.

“He was one of those glue guys on a team,” Kyle said. “All the different cliques or groups on a team liked Justin. They all craved Justin being one of their guys and his friendship.”

At Kinnunen’s funeral, which took place in Negaunee on Friday, Aug. 19, Kyle noticed many people from different teams that Justin was a part of.

Kyle said this really spoke to Kinnunen’s popularity and the fact that he was a great guy.

In more recent years, Kinnunen lived in Dallas. He got his pilot’s license and got a job as a pilot for American Eagle Airlines.Kyle said that Kinnunen found another passion in flying and he was a very successful pilot.

He had a passion for flying but also traveling, according to his obituary.

“It was certainly a tragic loss for his family, who has all of our condolences,” Kyle said. “It was also a loss for the hockey program. He was one of our own.”`