With an overall target of roughly $3 million in cuts, several university divisions have submitted a reduction proposal draft to the Strategic Planning and Budgeting Advisory Committee at NMU. 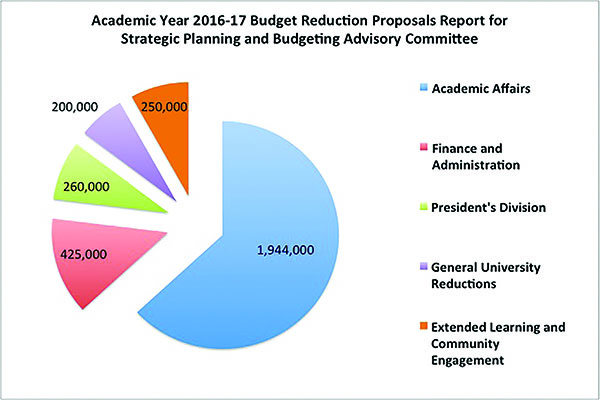 The proposal, for the current academic year, was submitted to the committee on Thursday, Aug. 18 by administrative leaders from the divisions expected to face cutbacks.

Reduced expenditures will most likely come from the general university budget, which includes university reserves and other savings from technology programs that have changed or are no longer offered as a program.

Other reductions will come from the academic affairs division, finance and administration, extended learning and community engagement as well as the president’s division.

The total reduction target is approximately $3.06 million, as a result of an expected 6.6 percent enrollment shortfall.

Roughly 63.5 percent of the overall $3 million target will come from the academic affairs division, according to the proposal draft.

An estimated $1.9 million will be cut from the academic affairs division. The finance and administration division has a reduction target of $425,000. General university reductions were estimated at $200,000. The extended learning and community engagement division will aim for a reduction of $250,000 and the president’s division estimates a $260,000 reduction.

Each administrative division faced its own share of challenges to contribute to the overall reduction target, said Vice President of Finance and Administration Gavin Leach.

The total reduction target amount was allocated proportionately between each division and within each division every department head was responsible for determining their own reduction amounts. Leach also said some of the proposed reductions are intended to save university dollars by doing things in a different way, such as eliminating software compliance agreements that are typically outsourced and developing them in-house instead.

“We need to adjust our operations to the size of our enrollment and that’s what we’re going through a process to identify—what types of adjustments need to be made and at the same time look at areas to cut and to reinvest,” Leach said.

Provost and Vice President for Academic Affairs, Kerri Schuiling outlined the method for determining potential cuts to academic programs, citing an academic viability review process that would review programs 3 years old or older that have a 3-year average of 20 or fewer majors for undergraduate programs.

In a Campus Connect newsletter, published Aug. 22, President Fritz Erickson provided further detail on the review process, saying programs with a 3-year percentage decrease twice as large as the university’s overall enrollment decline percentage during the same period would also be reviewed.

Schuiling said that the goal isn’t to cut faculty, but to find out where courses of low enrollment could be combined with similar courses if funds are available. Schuiling also stated that most of the base budget reductions are taking place as a way to balance and counter budget gaps.

“Budget cuts are to help balance a budget,” she said. “Focusing on enrollment, that’s where I believe investment comes in.”

Schuiling said because NMU is a regional comprehensive university, it has to make changes that others in the state aren’t willing to make.

“Most [public universities] who are regionals are coming to the conclusion that, ‘We need to carve out a niche that’s ours. Nobody else is doing this and if you want to do this, this is the place to go,’” she said.

“At the same time while we’re doing budget cuts, we’re being asked to be innovative—to come up with different ideas for different kinds of things.”

With 72 percent of NMU students typically coming from Michigan, and 50 percent of these in-state students from the U.P., along with a demographical decline in high school graduation rates, enrollment rates at NMU and other schools in the Midwest have been severely impacted.

“That’s hurt us the most I would say,” Schuiling said.

The Strategic Planning and Budgeting Advisory Committee will have another meeting to gain public input and to answer any questions from the NMU community at 3 p.m. on Wednesday, Sept. 7 in the Cadillac/Brule Rooms of the University Center.

The committee will finalize all budget reduction recommendations before the Board of Trustees meeting scheduled for Sept. 22.