Over a week ago, San Francisco 49ers quarterback Colin Kaepernick infiltrated news feeds everywhere. Word spread that the quarterback remained seated during the national anthem at the 49ers’ preseason debut against the Packers to make a statement on what he sees as unfair treatment towards African Americans and other minorities. 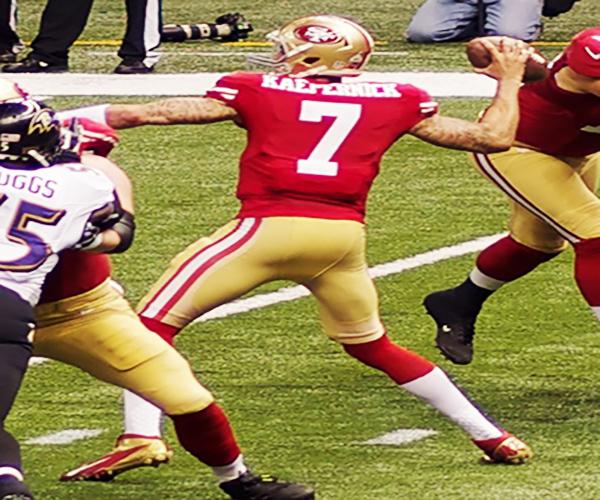 Kaepernick told NFL media that he could not show pride for a country that unfairly treats minorities, which is why he would continue to not participate.

“To me, this is bigger than football and it would be selfish on my part to look the other way,” Kaepernick said in an interview with NFL media.

“There are bodies in the street and people getting paid leave and getting away with murder.”

The 28-year-old quarterback has received backlash from fans and fellow athletes alike. Some are upset because they view Kaepernick’s actions as disrespectful to the country and its veterans. Others commend him for taking a stand and using his right of speech to promote societal change.

While it’s true that Americans have their right to express themselves and that participation in the national anthem is not impulsive; Kaepernick refusing to stand really just stirs up a lot of controversy and drama which ultimately distracts from his message.

Although it isn’t mandatory, some Americans find it disrespectful to not participate in the national anthem, especially if you’re a professional athlete or a celebrity.

And thanks to social media, those who are offended by it and those who support the action can congregate and bicker generating all sorts of noise on the web and by the end of the day, Kaepernick’s words get all jumbled up, and any meaningful dialogue about the issue is out the window.

Any fireman will tell you, fighting fire with fire only leads to an even bigger fire. People don’t tend to listen to you when they are mad at you.

You know people are going to get upset, why start the conversation on a bad note? Kaepernick should have taken a different approach to address the issue. He at least should have made his intentions more clear before starting his new trend.

Hindsight 20/20, I’m sure Kaepernick had the best of intentions going in and would do things differently if he had the chance. But in reality, the road to change is a two-way street. Athletes like Carmelo Anthony and
Serena Williams not only speak out against African Americans being treated unfairly, they go further to take action and try to be a positive force on their own.

I think it’s great that Kaepernick wants to use his star-power to help others. But one thing he must learn: it’s not what you say, it’s how you say it. People take things the wrong way and will make the discussion about something else if you let them.

Since the initial incident, former NFL long-snapper and Green Beret Nate Boyer published an open letter to Kaepernick in Army Times Magazine. In his letter, Boyer wrote that although Kaepernick’s actions
enraged him at first, he was willing to put his anger aside and listen to what the quarterback has to say and respects the quarterback’s decision to express his beliefs.

I agreed with what the veteran had to say and was glad to see Kaepernick meet with Boyer to help refine his message and to pursue his beliefs without stepping on people’s toes.