An eerie vibe sets in upon entering. Cages, cauldrons and fake blood fill the room. 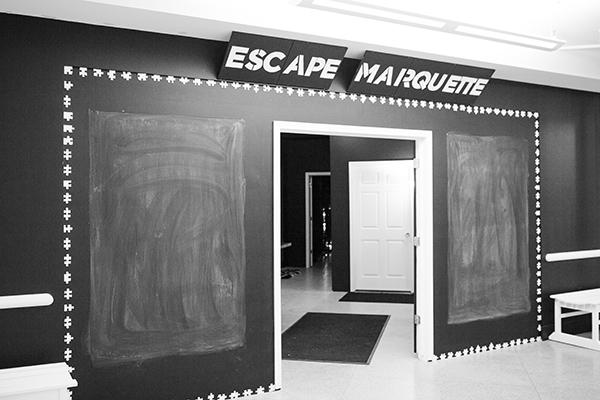 The door closes behind you and you’ve got 60 minutes to find a way out before becoming infected.

This is only one of the three rooms that test your critical thinking skills at the new local business: Escape Marquette.
The idea is to use clues placed throughout the room to eventually escape.

Owner Anna Hemstock described the business as an interactive Clue.

“It’s about creating one common goal, one interest to achieve. We’re inviting people to escape their reality by escaping ours,”  she said.

Hemstock tried an escape room for the first time in early March in Wisconsin and immediately knew this was a business she wanted to bring to the area.

“I knew before I even made it home to Marquette from Madison, that I was going to [open an escape room],” Hemstock said.

One room, “Infected,” uses limited lighting and sets the stage for a contamination to take place.

“The room limits your senses, which handicaps the group, creating this fear and anticipation to get you out of there,” she added. Another room, “Anna’s Room,” creates a mystery of Anna’s disappearance for participants to unveil and holds actual items from founder Hemstock’s childhood bedroom.

“Anna’s Room is about introducing me to the community because a lot of the clues in there say something about my life,” Hemstock said. The last room, “1963,” is so far the most popular room, according to Hemstock because of its compelling J.F.K., Marilyn Monroe affair theme.

“It’s a different take on the Monroe, Jackie Kennedy theme we’ve all heard before. However we just add a few lies, secrets, and riddles to give you an idea of what could have happened instead,” she added.

The rooms gained their custom theme from the game maker herself and with the help of her sister.

The items furnishing the rooms came from their grandparents house, donated items and props from local thrift stores, Hemstock said.

“One of our biggest business practices is repurpose, reuse, recycle,”  Hemstock said.

She prefers to try her hand at the crafty side of things rather than spending.

“The goal of our rooms is to really feel like you’re in that theme, in that organic environment, down to the smells we use before people come in,” she said. The business will take in customer feedback and change up the themes of the room every couple of months,  she added.

“These spaces can be manipulated and changed so we kind of just wipe out, repaint and redecorate them,” Hemstock said. There will be new rooms in the mix for the coming Halloween season, she said.

“We’re singular to Marquette, so we can provide products specific to here that resonate with the community,” Hemstock said. Hemstock would like to create a scare room this fall and do a play on the Marquette orphanage story, she said.

“I want to bring in these weird artifacts and maybe get some live actual role-playing lined up,” Hemstock said.

“Anna’s Room” will eventually become an escape the dorm room to appeal to the college students, Hemstock said.

Although the theme of the “Infected” room appears to have somewhat of a horror feel, it is appropriate for all ages.

“It’s hard to get people to think that it’s not scary because it’s dark, so they automatically think that it’s scary, but it’s great for families. It’s something to do for all ages,” she said.

Hemstock is from the Marquette area and graduated from Northern, but didn’t feel there was a job in the community that fit her, pushing her to create a business of her own, she said.

“You hear about people having to move away to get a good job, but I wanted to totally wipe that off of the table. I’m from here, I should be able to live here comfortably and do what I like,” she added.

Marquette seems to be really enjoying this new twist on entertainment, she said.

“We have had a lot of good feedback and support from the community, which is essential here,” Hemstock said.

“It’s very Scooby-Doo. It’s not just sitting—it’s hands on. Everyone’s  trying to find something, and towards the end you just come together. It’s very fun,” Jarvi said.

The new generation being so involved with technology is worrisome to Hemstock.

Escape Marquette is a way to break barriers and strengthen communication within groups, while making use of the critical thinking skills and senses we developed as children without relying on technology, she explained.

“I really enjoy this saying to sum it up, ‘We don’t rely on gadgets and gizmos aplenty, but we’ve got whosit’s and whatsits galore,’” Hemstock said.

Additional information on Escape Marquette can be found at www.escapemarquette.com