Seth Rogen takes on a new kind of film writing with this raunchy, R-rated, and all around existentially inspired animation, starring Rogen himself as a hotdog named Frank. 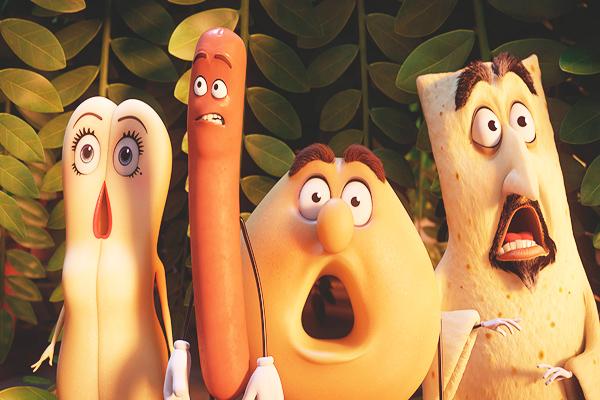 Rogen and his frequent collaborator Evan Goldberg dreamed up the story to this film with actor Jonah Hill.

“Sausage Party” is a bright but far from heart-warming movie that sets out to personify, sexualize and demoralize produce and everyday items you might pick up at your very own local grocery store, while also making you think about the meaning of life, existence and the acceptance of gods and a heaven or a “great beyond.”

As a New York Times review put it, “‘Sausage Party’ is an animated sex comedy about food… and God.”

The beauty of “Sausage Party” lies truly in its ability to tackle the real world issue of religious tolerance and express it in the strangest and most cringe-worthy way possible.

The film opens in a brightly lit grocery store filled with hopeful produce waiting to get “chosen” by a passing customer.

Rogen’s character Frank the hotdog is saving himself for his girlfriend Brenda the bun, who is voiced by
Kristen Wiig.

Both Brenda and Frank hope to be “chosen” together and taken to the great beyond where they can “go all the way.”

As the store opens for a holiday weekend Frank and Brenda get chosen. From there, one thing leads to another and the cart gets knocked over, leaving them lost in the grocery store with a rampaging douche on the loose.

From there, Frank eventually learns the truth about the great beyond. It is not actually a heavenly place, but rather a place where ravenous humans brutally murder and devour naive and unsuspecting food items.

Even humans watching this movie can feel the true horror of the kitchen through the eyes of a peeled potato.

After learning that the entire idea of a great beyond was made up by the non-perishable items in the grocery store because they wanted peace and quiet rather than constant screaming from the condemned food, Frank was determined to tell his fellow store items.

From here the plot continues to get stranger and stranger. Eventually it is revealed that the ultimate reality of humanized produce and store items can only be seen while a human is tripping on bath salts.

Frank finds out that it is harder to change the mindset of the rest of the store items when the idea of the great beyond was all they had ever known. This dilemma was the peak of “Sausage Party” because it actually makes you think about religious intolerance and the struggle of expressing an opposing belief.

The build up to this moment is perfect and is reminiscent of many real life examples. After this moment however, “Sausage Party” falls short.

The plot was doing so well before it caved to this stereotypical Hollywood cop out that overrides deep content with sex, sex and more sex. Other than that however, the plot was certainly unique and thought provoking.

In conclusion, I found myself laughing uncontrollably through most of this film, both due to the quirky dark humor and, honestly, sometimes out of pure bewilderment. This parody of many Disney and Pixar films seems lighthearted and fun at first, then throws you into an extreme cranial contort that leaves you questioning your own reality.

You will never look at a hotdog in a bun the same way again after watching “Sausage Party.