There are many new security measures being implemented on campus including installation of hundreds of security cameras, removal of overgrown bushes and dorms locked 24 hours. 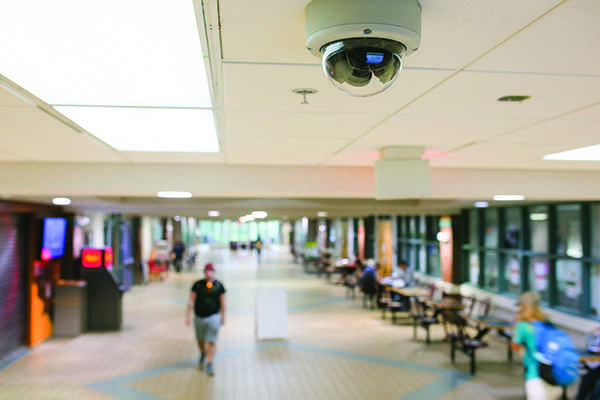 Over the past four years, about 650 security cameras have been installed at NMU and at least 50 more are expected by next fall. These security measures are mostly precautionary, Director of Public Safety Michael Bath said.

“We’ve had some crime,” Bath said. “But [implementation of security measures] wasn’t from any particular incident.”

The cameras have been placed in many high traffic zones, and serve to monitor public areas as well as exits and entrances to buildings. There are no cameras pointing into dorm rooms or bathrooms.

“We don’t monitor all of those cameras all the time,” Bath said. “There’s just no way to do that so I don’t want people to think there’s a false sense of security.”

He said cameras are utilized at the time of an incident or as a reactionary protocol.

“We are also not Big Brother,” he added.

Bath said the decision to switch from an analog system to IP cameras came after attending an informational conference. At the conference, it was decided that transitioning from digital video recorders to IBM servers was ideal because servers have more memory and are more reliable.

“We were at a point in time where we needed to make a decision on which direction we were going to go on campus,” Bath said.

“Some of the older legacy systems were starting to fail and needed to be replaced, so we had to make a decision.”

The effort of coordinating the installation of cameras through Public Safety and Police Services in conduction with the Telecom division on campus was in response to many departments on campus looking into security systems individually, Bath said.

Public Safety and Police Services taking a coordinated effort over the project allowed for a more centralized system that reduced cost through standardizing and consolidating what was already being asked for.

“From a pricing standpoint, with a lot of companies you pay a license fee and then you pay an annual fee after that per camera,” he said. “From the particular company we chose, you only pay a license fee once. That and the quality of an integrated system— was all in one package.”

Expenditures relating to this security system including cameras, servers and wiring, has totaled $388,000 since 2012, according to Assistant Vice President for Budget and Finance Sherri Towers.

“You can’t put a price on a life because it’s worth way more that what we’ll ever put into any of these systems,” Crime Prevention and Community Policing Specialist Don Peterman said.

Although main incidents the cameras are used for include thefts and destruction of property, they may also be used in more serious cases if needed, Peterman said. They all are recording, but they are not all being watched.

“We’re not going to have anything that doesn’t record because that’s at fault to security,” Peterman said. “There’s liability that you run into when somebody has something that happens.”

Along with precautionary measures taken with the addition of security cameras, bushes and trees along sidewalks and doorways have been removed around campus as a further measure. This came as a result of some bushes on campus being deemed large enough for a person to hide behind, Peterman said.

Public Safety uses a system called Crime Prevention Through Environmental Design to determine what bushes are too large for campus landscape.

“The shrubs and trees basically outlived their lifespan,” Peterman said. “Looking at trees along sidewalks and bushes beside doorways, we took quite a few out. Aesthetically it looks better.”

Last year was the first year all dorms became locked to non-residents for the entire day, he added. These locks were implemented as a precautionary and progressive measure following the lead of many other universities in the state.

Public Safety encourages students to use the many tools provided to them to take personal security into their own hands, said Peterman.

Things students should be aware of include blue light emergency phones, personal escorts available to walk students back to their dorm when it’s dark and the text alert system.

“Don’t be afraid to call us,” Peterman said. “There is never a stupid call.”

“I’m not doing anything bad on campus so I don’t really have to worry about that, but it could be seen as a bit of an invasion of privacy,” Romback said.