After a series of drownings in Marquette county, a committee of concerned community members formed to help combat the dangers surrounding the waterfront in Marquette. 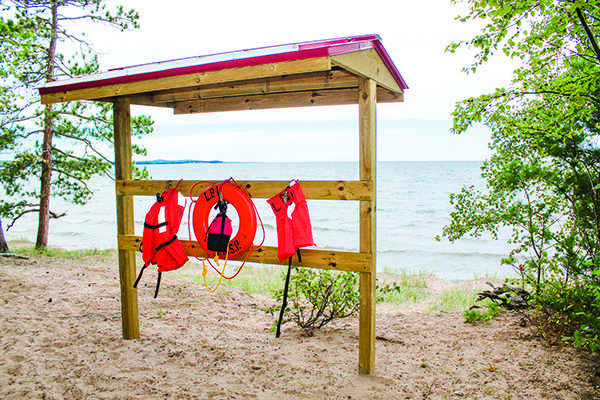 Lake Superior is beautiful but the massive body of water is powerful, said Eric Smith, co-chair of the committee.

“It’s an inland sea, not your grandmother’s pond,” Smith said.

Smith said Tansey was in the water when she experienced distress and Schroepfer lost his own life in an attempt to save her.

“This could have been prevented had there been life saving tools available to them. Had Justin [Schroepfer] put a jacket on himself before trying to rescue her, maybe he could have lived,” Smith said.

Today, there is life-saving equipment at high-risk areas such as Little Presque Isle because of the efforts from the Marquette Waterfront Safety Task Force (WSTF).

The task force, designed to seek out solutions to make Marquette’s beaches safer, was created in 2010 in response to tragedies similar to the one that took Tansey’s and Schroepfer’s lives, Smith said.

WSTF determined that between 1960 and 2010, 24 deaths were reported, 10 of those occurring since 2005. The task force also determined that males, ages 18 to 24-years-old are at the highest risk of water related death.

Additionally, task force members revealed that deaths occurring at Picnic Rocks accounted for over half of the total water related deaths in Marquette County, according to the WSTF Final Report.

Popular activities including mountain biking, climbing or swimming tend to be riskier and instead of telling people not to do these things, WSTF has focused more on educating people, Smith said.

“We can never predict every eventuality. If we did that, we would all stay locked up in our rooms, we would never venture outside, and we would miss 99 percent of what life has to offer,” he said.

One precautionary resource available to people is the flag advisory system, which is a system of color-coded flags that tell swimmers whether or not an area is safe to swim.

The status of each beach is kept updated on the Marquette City website. On the site, users can see up-to-date beach conditions, including closures and which beaches have been marked green for safe swimming. When a beach is marked green, a lifeguard is on duty, and the waves are under 2 feet high. When marked yellow, a beach has waves between 2 and 4 feet, and when a beach is marked red, the waves are over 4 feet and no swimming is allowed.

People often block it out and think distress in the water is something that would never happen to them, but when weather conditions change rapidly, people are often caught off guard, Smith said.

“Kaylie’s [Tansey’s] incident proved that. They were doing the right things. They were having a good time. They weren’t being careless. The conditions changed so rapidly, they were caught in some circumstances, and they were unprepared, and it ended with tragedy,” he said.

“Folks don’t realize how quickly you can become overcome once you no longer have any energy left. As your energy is zapped, you’re sitting there with 20 yards to swim to shore, but if there’s no energy there to get yourself in, what do you do? You’re done.”

After a drowning in 1998 in the northern part of Lake Michigan, lifeguard stations were put up.

After seeing a need in Marquette County, Kinnunen and other experts in the field presented what had already been accomplished in Mackinac.

“They used a lot of our information to get off the ground and implemented a lot of stuff that we did, including water safety rescue stations,” Kinnunen said.

Multiple changes were made throughout Marquette’s beaches,  including an increase in the number of guarded beaches and lifeguards employed, new lifeguard stands, the construction of self-serve safety equipment stations along high-risk areas and new maps showing which beaches are guarded and safe for swimming.

The safe beaches include McCarty’s Cove, Tourist Park and South Beach, adjacent to the Marquette Board of Light and Power generating facility, according to the WSTF Addendum Report.

This article has been updated to reflect the following change:

“This could have been prevented had there been life saving tools available to them. Had Justin [Schroepfer] put a jacket on himself before trying to rescue her, maybe he could have lived,” Smith said.