After a 4-game losing streak to start the season, the NMU men’s soccer team finally put one in the win column as they split their two game homestand. 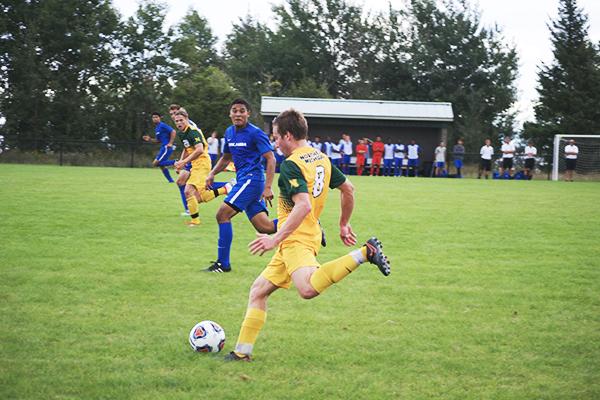 They hosted their first home game Friday against Lake Erie. The first half consisted of a few chances on both ends but amounted to nothing. After 75 minutes of a scoreless tie Lake Erie’s Jesse Schluter managed to put one in the net.

It was the first and last goal of the game giving Lake Erie the 1-0 victory.

Sunday the Wildcats came back to their home grass for the second game. This time they were up against Walsh University. After Walsh’s Michael Sandler scored an early goal off of a free kick, it was all Wildcats from there.

They answered with two goals to end the half by freshmen right midfielder Sveinn Karlsson and forward Ben Hoffman. The Wildcats continued their momentum into the second half, adding three more goals to the scoreboard from freshmen forward David Feldmann, defensive midfielder Eric Suess and a second from Hoffman in an 11-minute span, making it a 5-1 lead.

Walsh would eventually score once more finalizing the score of a 5-2 Wildcat victory. Hoffman would finish with two goals and two assists while Karlsson finished with one goal and three assists.

Junior goalie Brin Lapuh secured the win with five saves. Coming into Sunday’s game, the Wildcats had lost their first four games of the season and hadn’t scored in their previous three games.

They were happy to have such an explosive game.

“It feels good,” Hoffman said. “We’ve been close the past games. It was just a matter of time that we got those first goals. Now that we got them, it’s going to give us the confidence to keep scoring.”

When the final whistle blew in front of their home crowd Sunday afternoon, the young team had finally recorded their first win in their inaugural season.

Head coach David Poggi was happy with the victory and happy for his players.

“We were consistent and determined and the guys didn’t panic,” Poggi said. “But it’s just one game. We’ve got a lot of games to play. Every game in the conference is going to be tough.”

The Wildcats will begin their road trip this weekend against the undefeated, conference leading Tiffin University.

NMU looks to break out the explosive offense they showed their fans against Walsh and spoil Tiffin’s perfect season at 3 p.m. on Friday, Sept. 23 followed by a match against Findlay at noon on Sunday, Sept. 25.