A new $400,000 scoreboard brought to light tensions between NMU’s faculty union and administration during Friday’s Board of Trustees meeting. 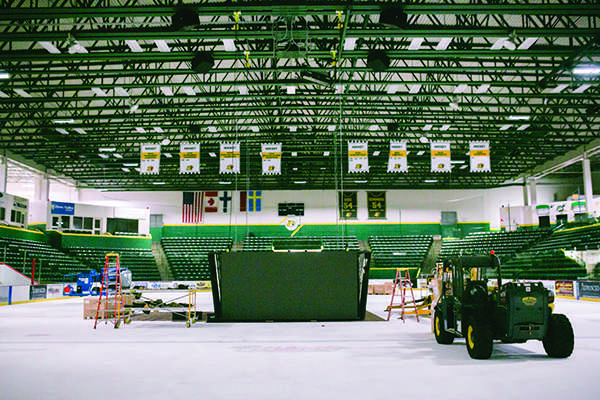 “Although we don’t have enough money to fund the core academic mission of the university, we have $400,000 to spend on a new scoreboard,” said Brent Graves, president of the NMU Chapter of American Association of University Professors. “That feels like a kick in the professional teeth of the dedicated faculty.”

Addressing the board during public comment, Graves said investing in academics was the best way to increase enrollment and bolster NMU’s reputation.

He said as it stands now, continuous budget cuts to academics have negatively affected student and faculty scholarship.

“Faculty do not have the resources to do their jobs properly,” Graves said.

Graves added that the frustration of the faculty was at a critical point after years of cuts while the university added four new athletic teams. The core academic mission of the university needs to be supported before anything else, he said.

“We cannot make NMU an outstanding university through gimmicks and facades.”

The scoreboard is a good thing for fans of hockey and basketball, said Forrest Karr, director of athletics, recreational sports and the U.S. Olympic Training Site in a presentation made at the board meeting. The video board will be able to show replays, highlight the pep band and play commercials for NMU’s academic programs. Additionally, corporate sponsorships will help fund the board in the form of advertising, Karr said. The old scoreboard was difficult and expensive to maintain because parts were no longer being made, he said.

When board members questioned whether the scoreboard could eventually pay for itself, President Fritz Erickson said he has been working with the marketing department on a plan to pay off the board in 3 to 5 years.

“I think this is a very appropriate financial investment for us to make, so I’m confident that we will be able to produce that kind of revenue,” Erickson said.

NMU used outside sponsorship and advertising to pay for a scoreboard in the Superior Dome, which was introduced in spring 2014. The department plans to follow the same model to pay off the scoreboard in the Berry Events Center, he added.

Erickson said they had an obligation to the facilities, but that they were also continually looking to make investments in education, citing several new programs added to NMU.

The core of the university is building the opportunity for education and relationship between faculty and students, Trustee Thomas Zurbuchen said.

“I appreciate the care and excitement that faculty bring to work,” he said. “At the end, champions for their students, at the end, the people who will go the extra step will be rewarded. I really hope and I know my fellow board members feel the same way. We want this to work and really be supportive of faculty.”

The connection that faculty have with students is something the university can never lose sight of, Erickson said.

“It is critically important to the life of the institution and the life of our students,” Erickson said.

The team is expected to have 28 players next year. Men’s Swimming and Diving had 25 athletes during the 2015-16 season, but now has 31 student athletes. Men’s Soccer, also in its first year, has 32 players. Women’s Golf, which had a team of nine golfers for 2015-16, now has eight golfers.

According to Vice President for Finance and Administration Gavin Leach, the four new athletic programs are financially breaking even as long as they meet their quotas for the number of athletes on the roster.

Investing in athletics contributes to academic excellence and student success, and investments like the scoreboard enhance the prestige and distinction of the university, said Trustee Rick Popp.
Bringing in international students and increasing enrollment are not only athletic objectives, but are university objectives, he said.

“I don’t think we do even enough for our investments in athletics,” Popp said.

Athletics bring in students that come out of Northern as professionals in their fields such as biology, math or health sciences, he said.

“Recruiting for that athlete is recruiting for Northern,” Popp said. “Every dollar is a Northern Michigan dollar.”