Through the shattered looking glass

Outside, Nazis smash shop windows, rioters fill the streets and authorities do nothing to stop them. While inside their home, a Jewish family argues about survival and what to do in the face of an uncertain future. 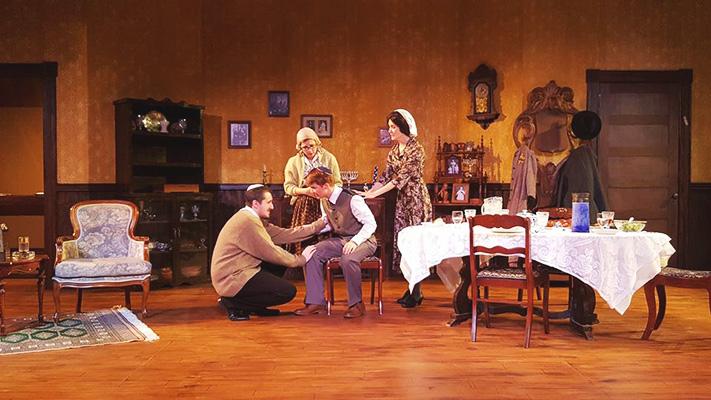 “Where a Certain Future” is the latest historical drama to premier at Northern, presented by the Forest Roberts Theatre. The play was written by NMU alumnus James Howard Carr and directed by Michael Blatt, a New York-based guest director. The play will run Oct. 5 through Oct. 15.

The play is set in Vienna on Nov. 9, 1938, during the infamous evening of Kristallnacht or “Night of the Broken Glass,” the start of two days of madness in which Nazi-sympathizers throughout Germany and Austria burned over 250 synagogues, trashed and looted over 7,000 Jewish businesses, along with hospitals, schools and homes, while police and fire crews stood by. Named for the shattered glass of store windows that littered the streets, it marks the moment when Nazi persecution of Jews intensified, leading to concentration camps and the horrors of the Holocaust.

“It’s important to show the human beings behind whatever events we’re portraying,” Joseph Carlisle, senior theatre and entertainment arts major, playing the role of Nathan Horowitz, said. “This is a very personal thing. It’s not at its core a political event or historical event—it’s a personal, a human event.”

The play focuses on the Abramsons, a Jewish family, inside their home while the chaos erupts outside. Much of the internal drama centers around Levi Abramson, the family’s father, played by junior theater major Devin Murphy, his daughter Deborah, played by Lilith Kontos, sophomore English major, and wife Sarah, played by Monica Nordeen.

Conflict arises between the younger generation that wants to flee Europe and head to America in hope of finding safety and greater opportunity there, and the older generations that want to stay in Vienna and preserve their cherished traditions.

“You see more of the emotional journey of what people went through when they still had that decision to make. ‘Do we stick around? Do we leave?’ You also see more of why it was difficult for them to leave,” Carlisle said.

The drama takes place all within the single setting of the Abramson’s dining room, and runs in real-time, just two hours in the lives of the characters, upping the intensity of the action. Friends of the family burst inside the home to warn the Abramsons of the happenings outside.

“Where a Certain Future” is staged at the Panowski Black Box Theatre located in the McClintock Building, a smaller venue, which adds to the sense of confinement but also allows the audience to be physically closer to the actors and emotionally closer to their characters.

“The tension is going to be palpable for the audience because when you’re right up close to the actors, you can see the panic on their faces and read every emotion,” senior English writing major Brian Czyzyk said.

“I think people are going to cry by the end of the show. I have too a couple of times.”

Czyzyk plays the part of Alfred Rosenthal, a friend of the Abramsons. He is one of the characters that burst into the family’s house. Although the characters are fictional, the history is well-researched. Blatt, the director, emphasized method acting, having his actors immerse themselves in the lives of their roles, even writing journals as their characters. They read historical accounts and watched documentaries and interviews with Holocaust survivors to prepare.

The actors also practiced their dialectical accents, the subtle inflection differences between German and Yiddish.

“It makes your characterization so much more grounded,” Czyzyk said. The actors have been in rehearsal since the end of August.

Czyzyk and Carlisle agree that the message of this play is relevant today. The current political climate, ethnic discrimination, and countries’ closing their borders to refugees, are similar now to the politics of 1938, when many countries would not accept Jewish refugees.

“There’s been a lot of talk about this being a parallel to the Syrian refugee crisis,” Carlisle said. “Everybody wants to wash their hands of it. They don’t want the refugees because they’re afraid of what they’ll bring with them. But [this play] brings a more personal perspective and makes people understand the human side of that.”