Entering a 2-game winning streak, the Wildcats obliterated the now 0-5 Walsh Cavaliers 54-14 at the Superior Dome over the NMU family weekend. 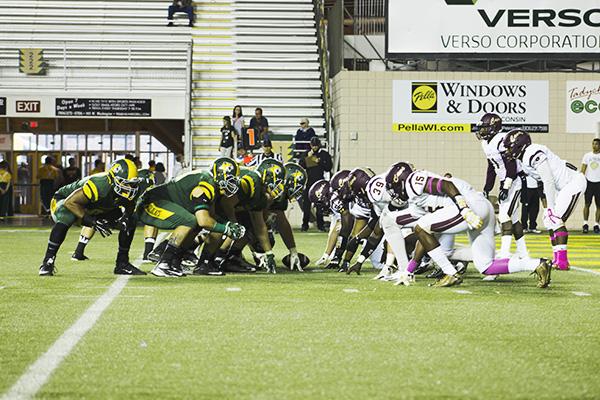 “I’m not sure we’ve had a win like that here since I’ve been here,” head coach Chris Ostrowsky said. “I thought it was a statement.”

He was glad to see the team have a high-scoring first half. He and the coaching staff have been stressing the importance of starting off strong and playing with intensity all four quarters.

“[Woods] comes to work every single day and he’s such a character kid. It makes it easy to love him, and he’s got so much talent to go with it,” Ostrowsky said.  “It’s going to be great to see him and Shaye Brown really run through this thing. We have six more [games] to go. I’m excited for those two kids—they both deserve it.”

Brown said since he and his receiver have been together for the last two years, a lot of their success comes from the level of comfort they have developed.

“He knows where I want him and I know where he is going to be,” Brown added.

Another field goal from Blackburn and a 9-yard touchdown reception from junior wide receiver Julian Crum punctuated Northern’s scoring in the first half. In the last 24 seconds of the half, the Cavaliers finally made it on the board with a touchdown, bringing the score to 30-7.

Within the first minutes of the second half, Northern’s defense recovered a fumble off a Walsh kickoff giving Sophomore running back Jake Mayon a chance to run it in for a 7-yard rushing touchdown. On the next drive, a forced fumble from sophomore linebacker Terrell Johnson would be scooped up and carried 38 yards by senior linebacker Matt Boonstra for another NMU touchdown.

A Wildcat hasn’t pulled off a scoop-and-score touchdown since Sept. 13, 2014 at Quincy when former Wildcat Austin Young accomplished the feat.

“That was a big deal for us,” Boonstra said, reflecting on the play. “Coming out of the half, they got that score and we didn’t want to give them any momentum.

“It was just great. Great for the team.”

Ostrowsky not only praised Boonstra’s effort and performance on the field but also the role he plays on the team off the field.

“He’s just an amazing kid that does it all the right way every single day. He’s a great student, and he’s my guy,” Ostrowsky said. “He’s a leader. He’s a winner, and he’s going to be an ultra success.”

With Walsh out of the way, the Wildcats turn their attention to next weekend when they take on the 3-2 Saginaw Valley State Cardinals. When the two teams last faced off in the Superior Dome, Northern broke up a 2-point conversion attempt by the Cardinals in the final seconds of the game, and slipped away with the victory 36-34.

“It was a hard fought game,” Ostrowsky said reflecting on last season’s SVSU matchup. “They’re a physical team that is scratching and crawling to be successful and have had tremendous success in this league.”

The Wildcats will be traveling downstate to bout with the Cardinals on their home turf at 7 p.m. Oct. 8.