Editor overboard: A day in the life of Marquette’s Coast Guard

Swimming in the icy water of Lake Superior in October is not something I would normally choose to do. But on this particular afternoon, I wasn’t met with the familiar smack of cold water as I took the plunge—my lungs didn’t gasp for warm air and my muscles didn’t forcefully contract. 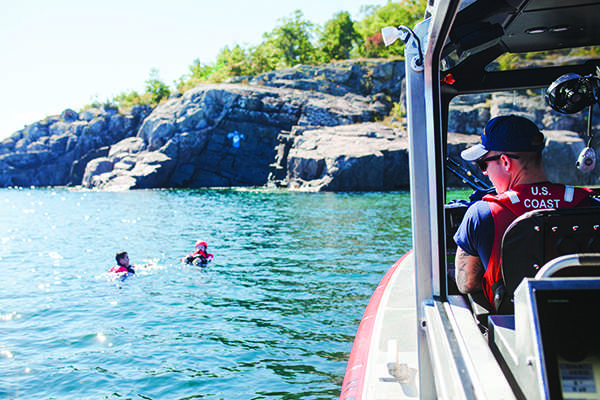 Rather, I instantly floated to the surface, my entire body bobbing up and down, warm and dry. With my dry suit filled with air, I was unable to pull my legs underneath the water and tread in a vertical position. Swimming away from the boat, I found myself only able to orient myself horizontally. Difficult to maneuver in didn’t begin to describe the suit I was attempting to swim in.

Looking behind me, three U.S. Coast Guard officers perched in a boat chuckled at my clumsiness while a fourth, Petty Officer Terry Bailey, swam with ease to meet me in the water, looking much more familiar and comfortable in the suit. He demonstrated the HELP position, which stands for heat escape lessening position. This maneuver, similar to the fetal position, helps slow down the release of heat when floating in cold water.

To demonstrate a rescue, Bailey wrapped one arm under my armpit and swam toward the boat, pulling me behind him. It was challenging enough for me to swim on my own in the

suit, so I was impressed by the skill and strength it must require to swim pulling another person alongside. Two other officers awaited my relaxed body to pull me from the water into the boat.

On Monday, Oct. 3, a sunny day with almost perfectly still waters, I rode with Coast Guard officers in a training exercise and experienced what it would be like to be rescued by the Coast Guard. Four officers accompanied me on a ride on Coast Guard small boat 29304, zigzagging through Middle Bay and Portage Is- lands, seeing Black Rocks and Little Presque Isle along the way.

Sitting in the seat in front of me was Petty Officer Gerald Gagnon, who was casually glancing back and forth, his eyes drifting around the entire vessel, keeping an eye on other boats in the water while discussing why he joined the military in the first place. That, he said, was the “million dollar question.”

Gagnon said he joined the military because of a desire to serve his country, for the chance to gain real world experience in law enforcement, and the education benefits. Gagnon is currently finishing an online degree in criminal justice from Northern Michigan University.

“The thrill and adrenaline of pulling a living body out of the water that would otherwise be dead— there’s nothing that gives you that high,” he said.

While I sat clinging to my seat in the boat, thankful for the life jacket they had given me, Gagnon and Petty Officer Henry Wilson, the coxswain steering the boat, casually discussed class courses and Wilson’s upcoming wedding. The relaxed nature of the officers, laughing and teasing each other, completely at ease driving a boat through the waters of Lake Superior was a shock to me. The expectation I had of stiff and serious trained military personnel was replaced with normal, approachable and jocular people my age.

A total of 16 Coast Guard members are stationed in Marquette. The station, which includes living quarters, a gym, lounge and kitchen as well as offices, is home to about six enlisted members at a time. The members rotate, work- ing two days and then breaking for two days. The station has jurisdiction from Huron Islands to Grand Marais.

“We have the prettiest areas of responsibilities in Lake Superior…We have Pictured Rocks, can you really compete with that?” Gagnon said.

The station includes a communication room where calls come in from outside the station. These calls can include everything from assistance (a boat breaks down and needs to be towed), to distress (a swimmer in need of res- cue). The crew can be notified of an issue in three ways: someone calls 911 and dispatch calls the Coast Guard, a mariner calls for help using the radio on signal 16, or lastly, a person could call the Coast Guard directly using their local number.

When dispatched to rescue, getting to the victim quickly is important, but if the coxswain drives the boat too fast and injures the crew or boat, their ability to rescue the person in need is compromised. The boat can travel up to 47 knots, which converts to about 55 mph. A safe boat speed depends highly on the state of the water, Gagnon said.

After rescuing me, the officers performed another training exercise. This time they threw a buoy overboard, simulating a scenario where a crew member falls off the boat.

“Man overboard, port side,” the crew members yelled in unison.

The boat erupted with noise, each officer jumping into action after a ring buoy was thrown from the boat into the water. The officers who were carefree only minutes before transformed in a second into highly trained military professionals. I watched with awe as smiles and jokes were replaced with hand signals and code words.

The driver immediately slowed down and began circling back to the pretend man. Gag- non, in the passenger seat, motioned toward the location of the man overboard. Each task was performed smoothly and in perfect sync with one another. The “man” was recovered in under three minutes. Once on board, the officers checked for vitals.

“He seems to have been bitten by a radio- active spider,” Bailey said.

And just like that, the commotion was over and the joking commenced.

While riding back to the station, Gagnon pointed left to a boat far off. Wilson glanced over and acknowledged the presence of the fellow boat. No words were needed for the exchange.

Before calling it a day, the officers decided to show me one more skill they are capable of performing. Wilson told all of us to hold on be- fore speeding the boat up and turning sharply. The boat drove in a figure eight shape, putting the boat at almost 45 degrees on its side, allowing Gagnon to reach out and touch the water that just minutes before was multiple feet away. The move shows the maneuverability of the boat, Wilson said.

“Petty Officer Wilson’s driving skills are parallel to none. You can quote me on that,” Wilson said.