Waking up in the sailboat you call home, next to your three best friends, stepping outside to feel the rays of the sun on your shoulders and hearing the breeze of the ocean about you, this is a morning routine most only dream about. Three NMU alumni and their friend have bought, restored and set off in a sailboat to make their dreams of sailing around the world a reality. 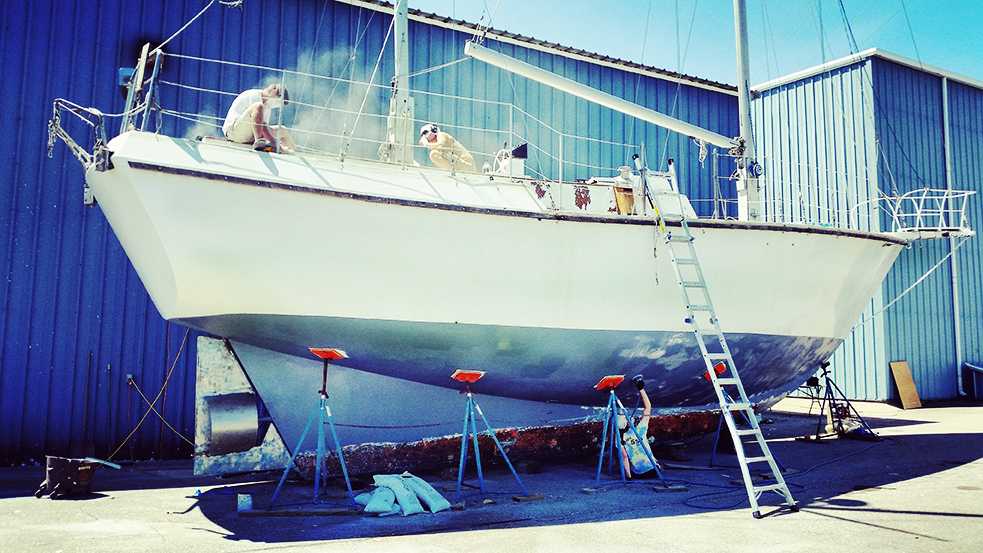 “Almost a year ago now is when the wheels really started turning, and ever since then it’s been save every penny you can,” Kralovetz said.

Falls purchased a boat that would be both spacious and seaworthy enough for the group of friends to take the journey they had discussed for so long.

Each of the friends were living and working in different parts of the country—Falls at a marina, Bethany in public relations, Luke at a dental clinic and Kralovetz for an outdoor recreation department. After securing their finances, each quit their jobs to reunite once again and begin the restoration of the 47-foot sailboat that would eventually become both their transportation and their home.

“Boats require a lot of maintenance, and during this trip things are going to break and we’re going to have to be in control the whole time,” Kralovetz said. “It’s going to be a lesson in dealing with things when things go wrong and we’re aware that things aren’t going to go right.”

The group has a rough timeline of what they would like to do for the next six months or so. The first leg of the trip was from Charlevoix to Chicago to say their last goodbyes to family before beginning their 4 to 6-week river trip that will take them to Mobile, Alabama. Eventually the four will take on the Pacific Crossing, the longest ocean crossing they will endure, Kralovetz said.

“When we cast off those dock lines, it’s going to be a month before we see anybody but ourselves.”

The self-reliance will be one of the greatest learning experiences from this trip, but also one of the many hardships the group will face, Kralovetz said.

“It’s finding a way to make everything work for us…and not counting on anybody else but ourselves. Realizing, one day I’m going to hate sailing and I’m going to be like, ‘I don’t want to be moving anymore, I just want everything to be still,’” Kralovetz said. “You’re out there on the waves and you’re rocking back and forth and you’re a little motion sick, those are going to be the rough days.”

Aside from the restoration of the boat, a lot of research and preparation have been put into planning this journey, Kralovetz said.

“We aren’t doing this because we think it’s going to be easy. We’re aware of the challenge and the challenge is what drives this and makes us want to do this. A lot of people think about the ocean and say, ‘Oh no, that’s too scary and your boat is too small,’ and this and that, but we’ve done our research and we know what we’re doing,” Kralovetz said. “We’re aware of what other people encounter and hopefully we’ve prepared ourselves for this trip and we’ll be able to tell once we leave,” Kralovetz said with a laugh.

The crew named their boat as the SV-Further for sailing vessel Further. The name gives a nod to Ken Kesey’s “Further” bus and his “Merry Band of Pranksters,” as well as describes the four’s inspiration for this trip.

“We have six boats in total together, but we want to take this boat further than any boat we’ve ever owned. This project is about going further and traveling further and sailing further hopefully, and meeting new people and kind of just taking everything to the next level for us,” Kralovetz said.

The sailboat will act as their “tiny floating home” as Kralovetz called it. Living together in such a confined space will be a big adjustment for each of them.

“When the boat is at 45 degrees, so is everything in it. The drawers are opening and the cupboard doors are opening, and when you’re at the dock, things are calm. You can cook things on the stove and wash your dishes,” Kralovetz said. “Working and playing all in this small space is something that will take a little bit of figuring out.”

Every member of the SV-Further crew has been involved in boating for quite some time. They naturally saw this trip around the world as the next step in their love of sailing.

“One of the things I love is how great it is as a mode of transportation. Being able to travel just from the wind is kind of a cool thing. I love traveling, but hopping on a plane to get there is really easy,” she said. “We’re going to have to work for it a little bit more to go places when we want to.”

Kralovetz is hopeful that by living more off of the grid the crew will be further reducing the greenhouse gas emissions that are produced so easily by living on land.

The four will be documenting their journey not only so their mothers know they are alive and well, said Kralovetz, but so others can see what the crew is doing along their adventure.

“Once we get out there finding internet is going to be something we’ll become very well versed in. Hopefully we will get pretty good at it,” Kralovetz said and gave a laugh.