The Northern Michigan volleyball team is back home this week to play two GLIAC conference opponents. 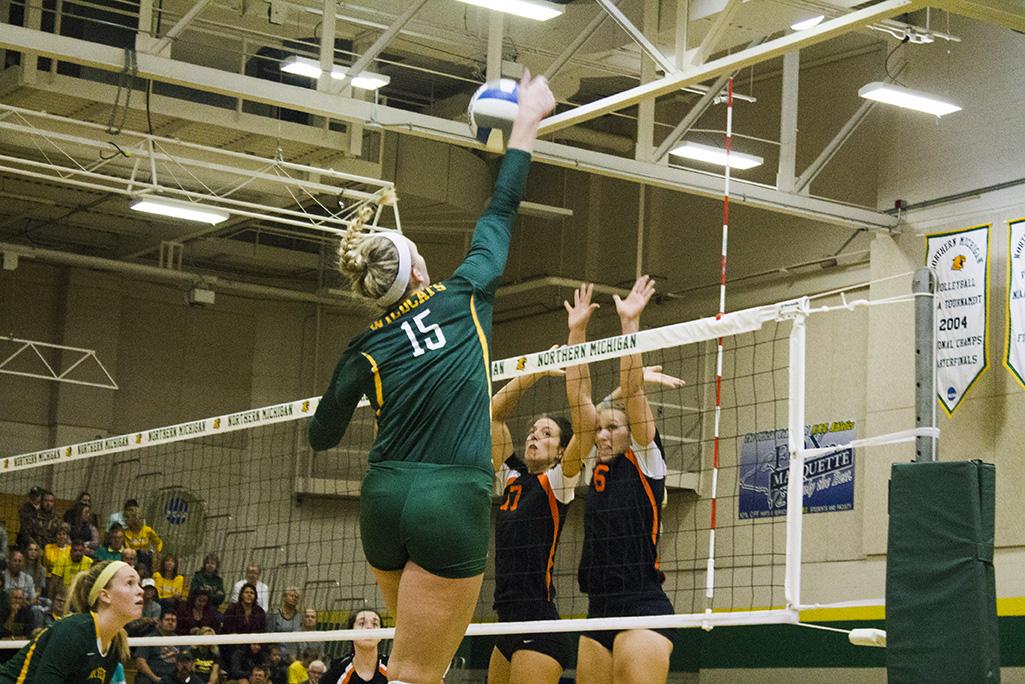 The Wildcats competed in the Mizuno Midwest Region Volleyball Crossover Tournament on Friday, Oct. 14 and Saturday, Oct. 15 and went 3-0.

After their performances in the tournament, junior setter Jami Hogeboom and junior middle hitter Madison Whitehead were named to the 2016 all-tournament team.

“It’s awesome because anytime you go to a tournament, you want to have players on top,” senior middle hitter Megan Crane said. “Having two of our players on the tournament team this year is excellent.”

Hogeboom recorded 164 assists for the tournament and exceeded the 40-assist plateau in every match.

Whitehead posted 49 kills for the tournament.

“It’s an awesome team award,” head coach Dominic Yoder said. “Our hitting percentage for the weekend was 0.315, so being able to play at that level for three straight matches is tremendous.”

Yoder added that the award is a representation of Hogeboom and how she set the game for the team while Whitehead has been one of the most consistent players for the past couple of years.

“It’s great to have two players make the team,” sophomore left setter Maggie Liebeck said. “Most teams only have one, and that just shows how well they played and how well we all played together for them to accomplish their goals.”

On Friday, Oct. 14, the Wildcats beat Maryville in four sets.

Sophomore libero Rachel Braunschweig led the ’Cats with 19 digs. Leading the team in kills was Whitehead with 13.

In the team’s second match on Oct. 14, the Wildcats beat Malone in four sets.

Junior middle hitter Kayla Chosa led the ’Cats with 16 kills while Braunschweig led the team again in digs with 18.

“We put together a really solid weekend of wins and really consistent play,” Yoder said. “I think it’s important since we are going back into conference play.”

Career highs were set for numerous players. Hogeboom set a new career-high with 67 assists. Liebeck (17) and Crane (11) both set new career-highs in kills, while Braunschweig set a career-high in digs with 26.

“It’s really good to win all three matches,” Crane said. “We’ve had this streak of not so great losses, but we’re on a win streak, so hopefully we can keep this momentum going.”

The Wildcats are back at the Vandament Arena this weekend. They will play the Ohio Dominican Panthers on Friday, Oct. 21 at 7 p.m.

“We’ve been on the road a lot this season, so it’s going to be fun to be back with our home crowd, getting our fans back,” Crane said.

Ohio Dominican is 7-11 this season with a 2-6 GLIAC conference record.

The Wildcats and Panthers have faced each other six times all-time, with the Wildcats winning five of those matchups.

“It’s weird playing at home because we’ve been on the road so much, but I know the players are looking forward to sleeping in their own beds before they play again and being in front of our fans,” Yoder said.

The Storm are 12-10 this season with a 4-4 GLIAC conference record.

Northern Michigan and Lake Erie have faced each other six times, with the Wildcats winning every matchup.

“We are hoping there’s a big crowd because we are feeling really good,” Liebeck said. “We are on a 4-game winning streak right now too, so that helps a lot.”

With the three wins, the Wildcats improved to 13-9 this season with a 4-4 record in the GLIAC conference.