For many students, the election on Nov. 8 will be the first and only presidential election they vote in during their college career. 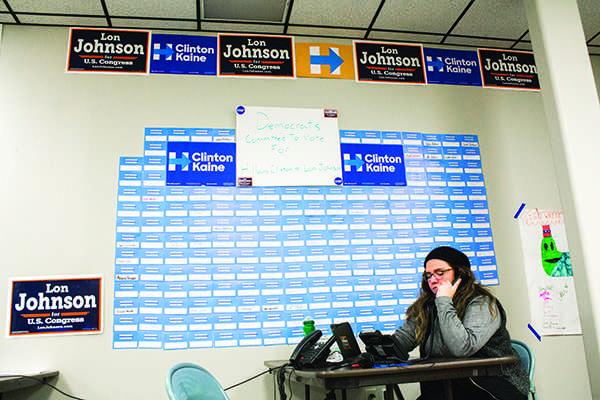 This  election does not just include presidential candidates, however. With Michigan Rep. Dan Benishek stepping down from his 1st District seat in Congress, an important Congressional election is also right around the corner for Michigan voters.

As election day quickly approaches, students and student organizations alike have been getting politically active both on campus and in the community.

Sophomore pre-law and Spanish major Sydnie Smith has gotten involved with the election in many ways, including by working as an intern for the Marquette Democratic Headquarters.

“This experience is important to me because I love politics,” Smith said. “I want to go into politics one day. I’d love to be a senator because it’s always been my dream, or even a Supreme Court justice. It’s my passion, it’s my heart, and it’s all of my values and morals.”

Smith has been working closely with the Lon Johnson campaign to inform the Northern Michigan community of Johnson’s values and  political stances. Johnson is the Democratic nominee for the 1st District seat in Congress. Smith said  much of what she does starts as a grassroots project. She spreads Johnson’s message by talking with people in Marquette County and the surrounding areas through phone banks and canvassing.

“He not only wants to save and keep social security the way it is—non-privatized—but he also wants to promote background checks and better gun awareness,” Smith said.

Along with being an intern, Smith also participates in Student Law Forum, ASNMU, the NMU College Democrats and the Academic Senate. She encourages everyone to participate and vote.

“Anybody can get involved,” she said. “I want everyone to have a say in the political process because that is the foundation that our democracy is built upon. Everyone has the civic duty to vote. Everyone has a right to their opinion—a right to say, and think and do what they feel,” Smith said.

Smith encouraged students to use multiple news sources when determining whom to vote for in order to get the most neutral information.

“Be prepared. Be informed. Know what you’re talking about. Don’t get half the story. Get the whole story and understand it from both sides,” she said.

Senior entrepreneurship major and President of Young Americans for Liberty NMU Chapter Steven Losiowski, tries to hold an event every other week promoting and informing students on campus about the values of the Libertarian Party. He believes many students do not know what the Libertarian Party stands for.

“A good way to sum it up is that we are socially liberal and fiscally conservative,” Losiowski said. “We want a limited government and low taxes, and we want to be basically laissez faire where we don’t want the government to interfere in everything we do.”

The Libertarian nominee for the 1st District congressional seat is Diane Bostow, who was not invited to speak at the 1st Congressional District Candidate Forum  recently held on campus between Lon Johnson and Jack Bergman and moderated by TV6. Bostow was stationed outside of the debate promoting her campaign along with members from Young Americans for Liberty, Losiowski said.

“We really do think the two party system is obviously broken and there needs to be awareness that there are other options, even if a lot of people don’t know about them.”

Because of many people’s dissatisfaction with the current Republican and Democratic nominees for president, Losiowski said that he thinks  this is a very important election year for Libertarians.

“We live in the United States where this is supposed to be a free country and we are supposed to be able to exercise our rights to vote—with the candidates we have today, it’s a very interesting election,” he said.

The NMU College Greens will have members sitting in Jamrich Hall handing out informational flyers, buttons and bumper stickers on Oct. 27 from 11 a.m. to 12:30 p.m. in efforts to raise awareness about Jill Stein’s campaign for the presidency.

“The Green Party is based on four pillars: ecological wisdom, social justice, grassroots democracy and nonviolence,” Hannah Garcia, president of the College Greens, said. “These ideals are shown with actions by Jill Stein. For example, she joined the Dakota Access Pipeline protesters because of the ecological stress that said pipeline would cause.”

The College Republicans have been working closely with former NMU student Jacob Ogea, who took the current semester off from NMU to become the Republican Party’s field director for the Upper Peninsula.  Sophomore corporate finance and accounting major Miles Lovdahl along with many of his fellow College Republicans have been working with Ogea to help with surveys and polling to gauge the current political climate. The group also helps with phone calls to promote their candidate.

“For me personally, I believe in smaller government as far as the conservative ways are,” Lovdahl said. “A lot of it comes down to morals, and me being a Christian myself, it comes down to religious beliefs also.” Lovdahl encourages everyone, regardless of party affiliation, to exercise their right to vote.

“We just want to help people get out there and if they’re not registered to vote, help them get registered,” Lovdahl said. “We’re not exactly trying to sway people one way or another. We’re just trying to get a feel for what the area has.”