Students seated themselves into 136 Whitman Hall Tuesday to catch the last of two films being presented this week that honor the struggle for equality as part of an NMU tribute to LGBT
History Month. 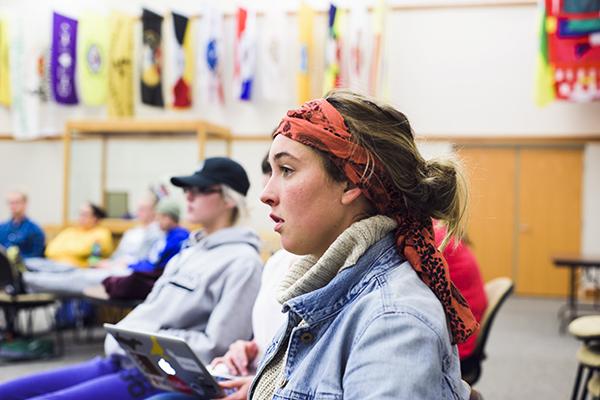 “The Business of Fancydancing,” shown at 7 p.m. Tuesday, Oct. 25, explores the tension a gay Native American man experiences while being romantically involved with a white man as he moves away from life on the reservation to a more urban lifestyle.

The second film is a documentary titled “Two Spirits” and was shown in the same room at 7 p.m. Monday, Oct. 24. The film portrays a time when many Native American cultures held places of honor for people of dual or integrated genders. It is a true story about how one young Navajo male struggles to be accepted by his community during his transition from a man to a woman but is killed before achieving equality.

Shirley Brozzo, assistant dean of students and associate director for the Multicultural Education and Resource Center (MERC), which organized both events, said she has tried for several years to make a combination between LGBT issues and Native American issues. In the past, the MERC has hosted similar events for LGBT History Month that usually include a guest speaker. Brozzo said the MERC has been showing movies for at least the last five years.

“I think it’s good for everyone to be exposed to LGBT issues,” she added. “Just to bring a little more awareness and to realize that there had been a time in our Native American past where this was a non-issue. If people were gay, they were gay and that was just who they were and they were totally accepted.”

Brozzo said some Native cultures are moving back to cultural mindsets prior to colonization. She said any time NMU has an opportunity to provide more information about any kind of oppressive issue, it makes a difference.

“I think the more information we have, and people see themselves reflected in what it is that they’re seeing—it shows people that there are others like them,” she said.

“Maybe they’re here, maybe they’re family members, or close neighbors, or whatever the case might be but they’re seeing themselves reflected in media and sometimes it just sparks
dialogue.”

LGBT History Month originated from an idea by Rodney Wilson, a Missouri high school teacher, in 1994. According to lgbthistorymonth.com, Wilson believed a month should be dedicated to the celebration and teaching of gay and lesbian history. He was later joined in his movement by other teachers and community leaders who collaboratively designated October as Gay and Lesbian History Month, as it was originally called.

October was chosen to celebrate LGBT heritage because public schools are in session and Coming Out Day, already occured within the month. Since ’94, many national organizations have endorsed LGBT History Month, including the Equality Forum, which assumed responsibility for promotions and resources in 2006.

Equality Forum is a national and international LGBT civil rights organization with an educational focus. More information can be found at equalityforum.com.

“Learn something more about gay history. It’s an important part of everyone’s history,” Brozzo said. “Most families have some members—whether they know it or not—who may be gay or lesbian, bisexual, transgender, anywhere on the spectrum. You’re here at college to learn some things, so let’s learn some things.”