Some of the founding fathers of punk rock return to their old sound while contributing their opinions surrounding new social and political agendas of 2016. “Revolution Radio,” Green Day’s 12th studio album, has listeners both old and new skeptical upon its release. 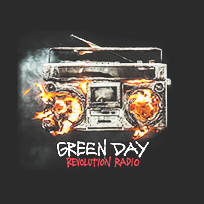 These Rock & Roll Hall of Fame and Berkeley, California natives are returning after their mediocre, content-heavy, record trilogy  “Uno” “Dos” and “Tre” in 2012.

The trio consists of Billie Joe Armstrong contributing vocals, Mike Dirnt with bass guitar and drummer Tre Cool. It’s no secret that the band is working to honor their underground roots of  924 Gilman St., a venue where other groups began such as The Offspring and AFI.

With this album, the group returns to the sounds of older works of the late ’90s and early ’00s while expanding into new chord combinations to reflect on the issues surrounding the government and social movements of today.

Audience: Fans of earlier albums such as “American Idiot” and “21st Century Breakdown” will find redemption in the bass-heavy, fast moving tracks such as “Bang Bang” and “Revolution Radio.”

Tracks like “Say Goodbye,” “Somewhere Now” and “Too Dumb to Die” offer heavy bass line, pedal-to-the-floor drumming, along with gut-punching vocals from Armstrong.

Many are familiar elements also heard on older projects like “Dookie” and “Nimrod.” Together, the album returns to a formula that is still able to give Green Day their unforgettable and distinct sound even after 12 records.

Writing: The lyricism behind “Still Breathing” lets listeners walk beside Armstrong as he embraces his journey to sobriety. This teaches the importance of not allowing tragedy to define you but rather allowing it to fuel you into a brighter future. “Ordinary World” and “Troubled Times” also show growth, and wisdom within the writing of Green Day.

These tracks showcase the stronger aspects of the album by providing more mature lyrics. Tolerable tracks like “Youngblood” and “Outlaws” function as filler between higher points in the record.

These songs serve as good background music but come across as missing power and precision. While they carry a familiar Green Day sound, they leave a bland taste for listeners.

Relevance: Much of the lyrics heard on “Revolution Radio” are relevant due to present political and social issues surrounding our current culture. It may be hard to relate to these issues in a decade when they are no longer on the forefront and with an always evolving audience.

Dedicated listeners will most likely still return for the softer sides of this record though, giving it a strong shelf life.

Verdict: Given recent attempts to reconnect with a nostalgic-hungry youth, this record may come across as more of a tiring effort among listeners who have been flooded with an overwhelming amount of similar content in recent months. Many ’90s bands are attempting much of the same.

Despite Green Day’s much earlier arrival to the punk rock stage, this could be seen as bad timing for the group. “Revolution Radio” is a new twist on an old sound.
Green Day rejuvenated their band’s image after their last record release in 2012 and do not disappoint with this album by stepping up their lyricism and reviving elements of their old sound.