The Northern Michigan volleyball team is on the road this weekend to take on two GLIAC conference opponents. On Friday, Oct. 21, the Wildcats hosted the Ohio Dominican Panthers and lost in five sets. 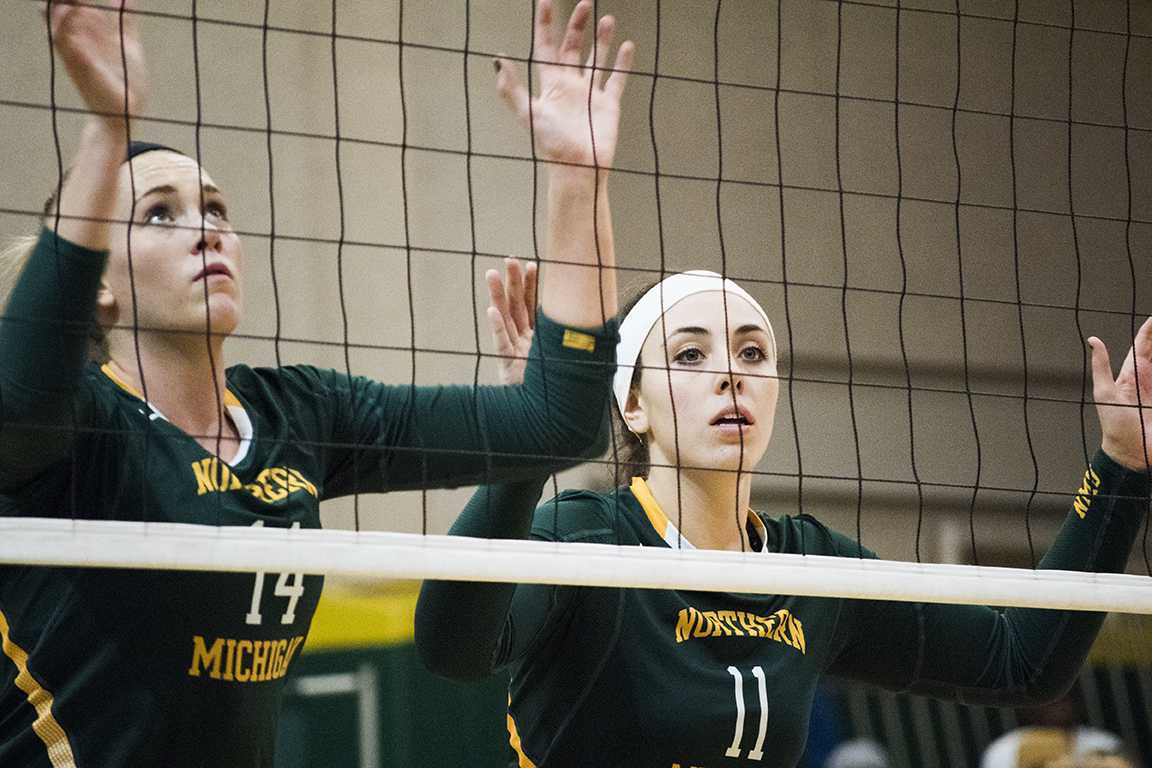 “We definitely had opportunities to close the match out,” head coach Dominic Yoder said. “We were just unfortunate to have untimely errors at a couple of critical points, but very proud of the aggression the team presented.”

“I’m proud of our fight and the character that we demonstrated as a team during that fight,” Braunschweig said. “Being selfless teammates is something we have put great emphasis on throughout the season.”

Also hitting the double digits in kills was junior middle hitter Kayla Chosa (12) and senior middle hitter Bridget Bussell (11). Northern Michigan won the first set 25-23, then Ohio Dominican responded by winning the next two sets, 25-22 and 25-23. The Wildcats then won the fourth set, taking a 27-25 extra-point victory to force a fifth set, which the Panthers won, 15-13. The Wildcats had 11 aces in the match. Senior left setter Marta Fraga Guntin had four of those aces to lead Northern Michigan.

“Lake Erie had a good game plan going in against us and they executed it flawlessly,” Yoder said. “[Whitehead] and [Braunschweig] both had a very good match against Lake Erie.” Whitehead had a team-high eight kills while Braunschweig led the Wildcats with 15 digs.

“I think throughout our game we were tested and throughout the rest of our season this will be a recurring theme,” Braunschweig said. “I think the game against Lake Erie was a good reality check and we will continue to learn, grow and come back stronger and more united as a team.”

On Friday, Oct. 28 at 7 p.m., the Wildcats travel to Allendale, Michigan to face the Grand Valley State Lakers. The Lakers are 12-9 this season with a 6-4 GLIAC conference record.

“This week in preparation for Grand Valley State and Ferris State we will continue to work hard,” Braunschweig said. “We will find and maintain the passion and the pride for the game, our teammates, and our school that we will need to aid us in our competition this weekend and the rest of our season.”

Northern Michigan and Grand Valley State have faced one another 99 times all-time with the Wildcats leading the series
49-48-2. At 5 p.m. on Saturday, Oct. 29, the Wildcats will be in Big Rapids, Michigan to face the Ferris State Bulldogs.

“We’re going to make a few adjustments with our lineup,” Yoder. “We will continue to improve on serving and serve received and just have competitive and consistent play.”

Ferris State is 18-5 this season with a 9-1 GLIAC conference record.

The Wildcats and Bulldogs have faced each other 90 times all-time. Northern Michigan leads the series 47-43.

“We are a resilient and competitive team,” Braunschweig said. “I am excited to see what we can do as we come together to fight for the remainder of the season.”