Dismantling the ties of meat and masculinity

“No great story ever started with someone eating a salad,” read a poster on the wall of a steakhouse. “Eat like a man,” blurted a sticker stamped onto the window of a restaurant boasting about its newest burger. Advertisements such as these show how veganism is portrayed as lacking flavor and how the consumption of meat has become associated with masculinity. 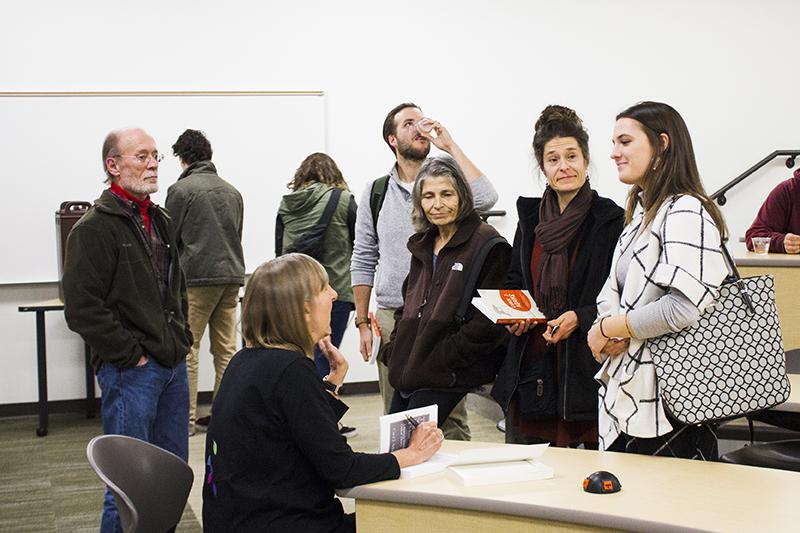 The vegan and feminist movements are not typically directly associated with each other, but one woman is trying to change that.

Carol Adams, proud feminist, anti-racist and grassroots activist, presented the ideas serving as the foundation for her groundbreaking book “The Sexual Politics of Meat” to students and community members Thursday, Oct. 27.  First published in 1990, the book has been called “a bible of the vegan community” by the New York Times and provokes a discussion on the interconnectedness of the vegan and feminist movements.

“This slideshow presentation examines a way of looking and thinking and feeling. It exposes the mythology about animals and women operating in Western culture. My goal is to guide you from the dominant and normative framework to one more liberatory,” Adams said.

As she sifted through the collection of powerful images with the audience, Adams seemed to want to make it clear that her message was not simply about the advertisements she showed the audience, but the attitudes behind them.

Adams explained that the association of meat with masculinity has become naturalized. Any man who does not consume meat is seen as a violation of the gender binary assumption. Although the consumption of meat is not portrayed as feminine, women are often sexualized to be used in advertisements for various parts of the meat industry.

The images shared by Adams showed how depictions of animals are even given female human characteristics, many times sexualized again.

“The fact is the intersection of race, gender and species is always happening,” Adams said.

She stressed that we are not in a post-feminist nor a post-racist world and that that is something we should take into account as we are exposed to advertisements from various medias.
Rebecca Ulland, director of Northern’s gender and sexuality studies program was in charge of organizing Adams’ presentation on campus.

Ulland said she has received very positive feedback from the event and was impressed by how Adams brought together her arguments.

“She was very personable, very genuine, and I thought she presented her argument very well because she used a lot of imagery that is out there—she didn’t manufacture this stuff,” Ulland said.
A book-signing of “The Sexual Politics of Meat” followed her presentation.

Ulland along with some faculty, students, and community members had the opportunity to go to dinner with Adams following the presentation.