“You come here often?” asked the prince, nudging Rapunzel over to make room for himself to sit down next to her in her tower. 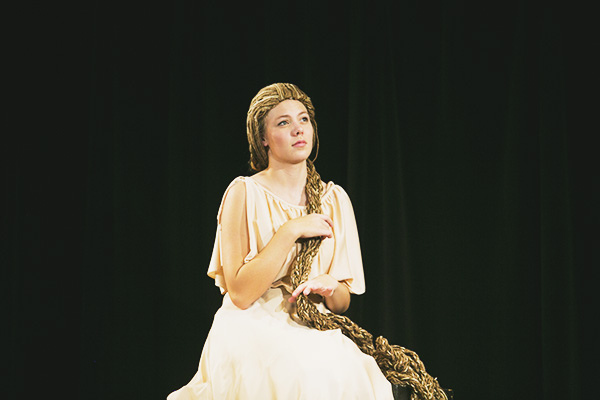 “Hey there, hot stuff,” a different prince swoons over a woman he passes by shortly after she had made deals with the devil, an enchantress and Rumpelstiltskin.

The characters from the many tales of Brothers Grimm are being brought to life in one show, on one stage.

Alpha Psi Omega (APO), NMU’s theatre honors fraternity, will be performing “The Brothers Grimm Spectaculathon” at the Black Box Theatre the evenings of Nov. 10, 11 and 12 at 7:30.

The fraternity, APO, wants to provide “theater by the students, for the students,” said Anna LaBreche, senior theatre major and director of Brothers Grimm.

“Working with other students has been so much fun, but at times it definitely gets hectic,” LaBreche said.

Without involvement from faculty, students gain a deeper understanding of what it takes to put on a show—from working around the students’ class schedules to considering funding and deciding what show to perform.

“The Brothers Grimm Spectaculathon” attempts to combine all 209 stories, both classic and obscure, in a fast-paced, slapstick comedic performance with actors each taking on multiple roles.

“It’s a fun script,” said Cecilia Smith, a junior speech, language, and hearing sciences major who plays the roles of Girl, Mother, Snow White and Crab Person #1. “Comedies are all about timing and so it takes a good amount of rehearsal to prepare for this kind of script.”

Although each character has a different costume, actors had fun practicing using different voices for each of their roles. Brian Czyzyk, a senior and English writing major who plays 11 different roles throughout the performance, described the show as, “a barrel and a half of laughs.”

The abundance of dry, outrageous humor that is the backbone of the show may surprise some of the audience, predicted Lily Howder, a junior theatre major, stage manager for Brothers Grimm, and president of APO. She hopes that when people leave after the performance they will be impressed by how hard the students have worked.

“I really hope people leave talking about how this group of students came through and did something here at Northern that was really great. We came together and brought this show to life,” Howder said.

Performance of “The Brothers Grimm Spectaculathon” will begin at 7:30 p.m. Thursday through Saturday. Tickets are $5 for students and $10 for the general public.