A split weekend against the University of Wisconsin leads the Wildcat Hockey team into a series against the Bowling Green State University Falcons at the Berry Events Center. 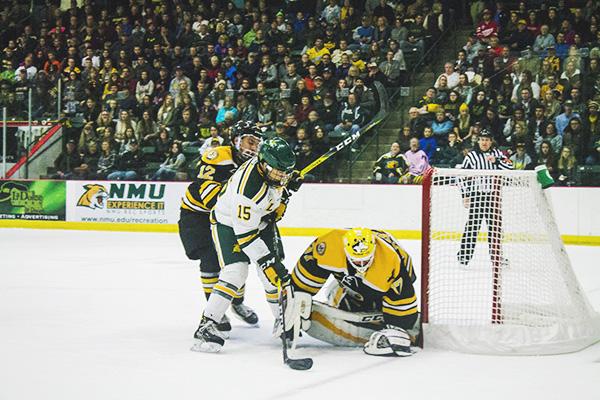 The ’Cats topped Wisconsin in a 5-2 victory on Friday night. Just 33 seconds into the game junior forward Zach Diamantoni found the back of the net.

Saturday night Wisconsin shut out NMU in a 2-0 victory.

“We definitely weren’t satisfied with a split, but we thought we progressed after the tough weekend we had with Tech,” Diamantoni said.

Going into the next series the focus for the Wildcats is improving special teams, head coach Walt Kyle said.

“Special teams right now are an issue. We’re not scoring on the power play,” he said.

The Falcons started the season as No. 1 in the preseason coaches poll. They are currently 2-7-1 overall and 1-3-0 within the Western Collegiate Hockey Association, putting them 9 out of 10 in the conference.
Diamantoni said they aren’t looking at the standings and they see Bowling Green as a fierce opponent.

“The record may not reflect the team they are, and that’s how we feel about our record,” he said. “It’s going to be two really evenly matched teams going at it this weekend. That’s always a good battle.” NMU hasn’t played the Falcons at the Berry Events Center since Dec. 6, 2014.

NMU has only won a single game on home ice this season, the exhibition matchup against the University of Victoria.

“We just have not done a good job here at home,” Kyle said. “That’s an obligation we have and we’d like to show our fans here what we’re capable of.”

“We’re going to be focused on getting to the net, getting hits in on them and getting in the zone early,” Payne said.