“Hey hey, ho ho, Donald Trump has got to go,” cheered a crowd of about 20 NMU students and a few community members Tuesday evening outside the steps of the Marquette Post Office, in a protest sponsored by the NMU College Democrats. 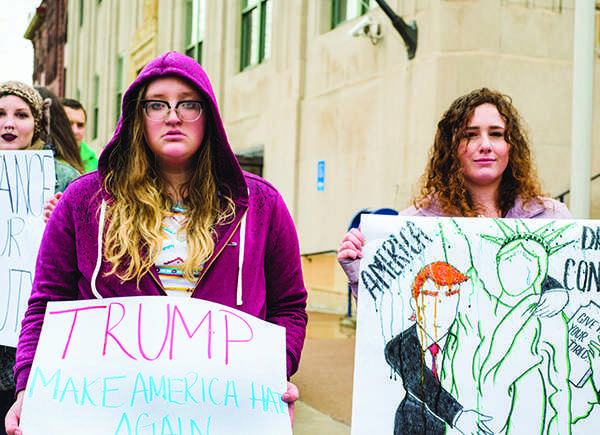 On a street corner at the busy intersection of Washington and Third streets, from 3 to 9 p.m. Tuesday, the protesters sang a chorus of “God Bless America” and erupted into whoops with each passing car’s honks of approval. Their paper signs, soggy in the drizzling rain, read “Love thy neighbor,” “Build bridges not walls” and “Justice for all, not just white straight America.”

“We came together as NMU College Democrats and got people to come out to show solidarity with the people of Marquette,” Raak explained. “We want them to know that Marquette is a safe place to live. It’s a college town. You should feel accepted here.

Donald Trump’s hatred will not win in this country. We’re here to simply say, ‘#notmypresident’ because he does not represent the values that America holds, which are equality, liberty and love.”

A car came by and the driver shouted, “Get over it.”

Across the street stood three men, two of them holding American flags, occasionally yelling replies to the protesters, “Praise God for Donald Trump.”

“I think you’re going to see that within 100 days after he takes office.”

These critics of the protest came in a “spur of the moment,” Coltman explained.

Holding one of the flags in support of the United States, community member Bruce Gustafson described himself as nonpartisan and an independent.

“We’re standing here in support of the Constitution and the peaceful transfer of power,” Gustafson said. “We’re all constitutionalists.”

Coltman added, “How the Constitution was originally intended.”

“We’re all about the peaceful transfer of power—when it’s not going to a fascist, in my opinion,” Raak said. “As Democrats, we respect the Constitution.”

Other student protestors voiced their opinions as well, amongst chants of “Love trumps hate.”

“It’s important to stand up and show the world that I don’t stand for the values that we essentially just elected,” said Sheila Williams, junior marketing major.

“This is really exciting. It’s a big moment in our lives, for millennials and all Americans,” Malone said. “I’m sure you know someone who is a minority—LGBTQ, Latino or African American. Trump doesn’t care about them. He only cares about himself. I’m here because I care.”

President-elect Trump’s win on election night has caused protests across the United States, some violent, some peaceful.

This protest put on by the NMU Democrats is at least the second “solidarity rally” to occur in Marquette since the election results. Wednesday, Nov. 9 students organized a gathering on the NMU academic mall to show support for one another amid their fears about America’s future under the Trump administration.