Students, professors and community members alike packed themselves snug in the warmly lit community space of The Ore Dock Brewing Co. on Thursday, Nov. 10 to listen to NMU biology department’s Kurt Galbreath give his “Science on Tap” speech on “Parasites: the Good, the Bad and the Ugly.” 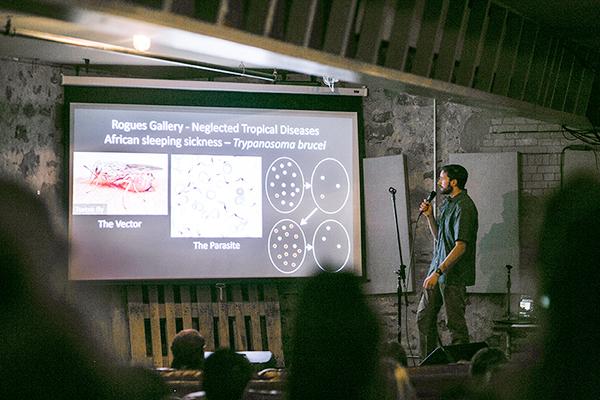 The event was free and open to the general public, and gave a genuine excuse to clank quality pints over an intriguing topic.

Radiating energy sparked by his inevitable passion in his field of expertise, Galbreath captivated the audience with loathsome parasites and their actions in host bodies.

When prompted to define a parasite, the crowd chimed in with satirical answers of Donald Trump and children. Homo sapiens comments aside, parasites can be defined on a basic level as an organism that lives off of a host and does harm.

Some of the descriptions and images shared were not for the squeamish, but undoubtedly revealed the true toll these organisms can take on an unsuspecting body.

“Once people get past the ‘ick’ factor inherent in discussing organisms that can do some pretty extraordinarily awful things to their hosts, most are amazed by the complex life histories of parasites,” Galbreath explained. “Over the course of a single life cycle, a particular flatworm might have to survive in a vertebrate’s lung, a snail’s body or a freshwater crab’s muscle tissue.”

The presentation demonstrated that anyone can be susceptible to the threat that parasites pose. Galbreath mentioned that even Charles Darwin himself allegedly died of a parasitic infection carried by a beetle in the tropics, who took notes on the beetle that infected him before his last hours.

But before we can all write parasites off as bad, Galbreath showcased the potential positives that can come. Parasites can be indicators of biodiversity, strengthen ecosystems and even mitigate inflammation in conditions associated with the gastrointestinal tract, such as Crohn’s disease.

The lecture well-lasted the full session with eager participants craving to hear more.

Galbreath stressed the importance of educating the masses on understanding how parasites interact with their hosts.

“Climate change and other human-driven environmental impacts can influence the potential for parasites to switch hosts or become pathogenic. Parasitic disease is a huge drag on global productivity that contributes to the destabilization of societies and causes much human suffering,” Galbreath said.

Max Gleiss, senior marketing and finance double major, is a regular attendee of “Science on Tap” and confidently felt Galbreath made the information presented accessible for all attendees despite their background in the topic.

“I like being able to enjoy a beer while listening in on genuinely interesting topics. Last year I was dragged into my first ‘Science on Tap’ event, but then I realized how cool they were and needed to make time for it regularly in my schedule,” Gleiss said.

Lizzie Corser, tap room and event manager of the Ore Dock Brewing Co., said “Science on Tap” is rounding out its second year in existence.

“Our mission is a 2-fold focus on product and community. We see ‘Science on Tap’ as a great opportunity to connect the university demographic with the general public, as well as provide a more laid-back educational atmosphere than the traditional classroom setting,” Corser said.

Both Corser and Galbreath made special note to give recognition to Norma Froelich of NMU’s earth, environmental and geographical sciences department, and NMU’s chapter of Sigma Xi, the Scientific Research Society, who take the initiative to organize this collaboration between the Ore Dock Brewing Co. and the university.