Getting hit with humor

A welcome reprieve from the tiresome week for weary Wildcats, comedian Jeff Scheen greeted the ears of the students gathered at Jamrich Hall Friday, Nov. 11. 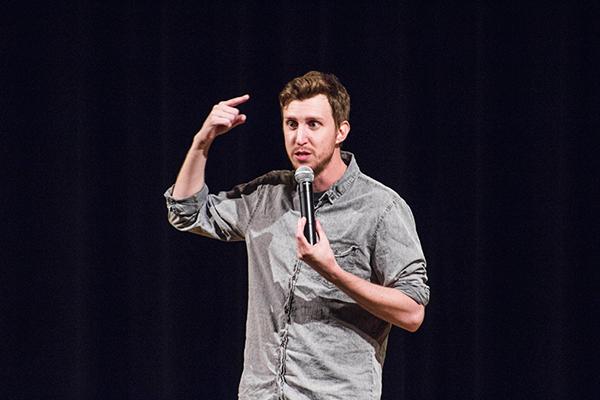 He avoided politics and delivered a routine on his colorful childhood and quirky love life. Getting hit by a car and sneaking out of the hospital without paying a dime and talking about how, as a child, he whispered everything he said after speaking, are all stories the crowd lost themselves in for an hour.

A crowd of about 90 people filed into the 1100 auditorium room of Jamrich. The act began with a smiling man walking on stage asking for the audience to give themselves a round of applause and apologizing in advance for making it a weird night.

At first the crowd was a little cold, not sure how to react with many of them now at their first live comedy act. As the night went on and Scheen relayed more stories of his odd upbringing in the forested small town of Holly, Michigan, the crowd began to warm up and felt comfortable giving giggles, hahas, chortles and snort-laughs.

Advertising for this event was unique, as there were not any posters for it on the billboards on or around campus. Instead, Primetime Productions had another idea.

“We put notes on the doors around the residence halls,” said Joe Weickert, president of Primetime Productions—the student group responsible for bringing entertainment to campus. “We knew it was going to be a trade-off in that we would miss the commuter audience. But I’m happy with the turnout.”

When Scheen first moved to Chicago, he still had the heart of a rural boy and neglected to look both ways before crossing the street. One day, when his bus arrived, Scheen crossed the street without paying attention. Once out in the street he thought to himself that he should find out what’s going on to his left in which he saw a Honda Civic approaching quickly.

Before he got hit and thrown to the ground all that went through his mind was a brief expression of surprise.

Since he was trying to catch a bus, his mind hadn’t yet acclimated to being hit by a car, so he picked himself up, dusted off and boarded the bus to bewildered eyes.

After the event Scheen answered a few questions about his professional career. Scheen started comedy by attending an open mic night at a local comedy club, and he bombed. He paced back and forth on stage with a piece of paper shaking in his hand.

However, he did one joke that he hadn’t written beforehand and it got a great reaction from the crowd, Scheen said. That’s why he continued to pursue comedy.

“It was like a drug,” he said, commenting that a good audience is what makes stand-up so rewarding. Scheen added, “Anyone who wants to get into professional comedy, just go for it once and see how you feel.”

Finally, to get creative juices flowing to write a routine, Scheen thought long and said, “Coffee… and pacing in a hotel room while whispering ideas to myself.”

Scheen closed the night by giving advice on making friends according to his own experience.

“Just keep following them until they give up, and then they’re your friend,” he said.