The Northern Michigan Hockey team, who now stands ninth in the WCHA, fell to the Bowling Green Falcons in both games of the home series over the weekend. 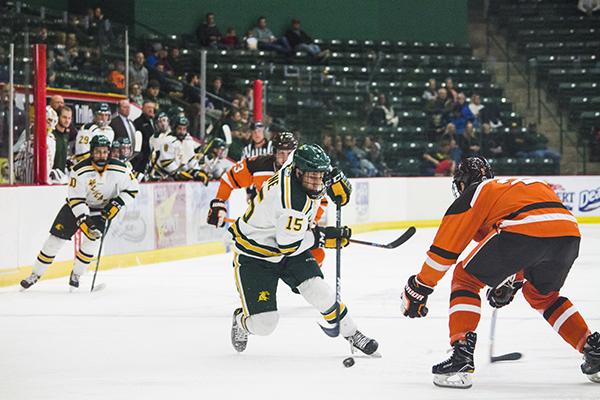 Friday’s match-up ended in a 5-1 loss for the Wildcats. The Falcons claimed the first lead of the game 4:44 into the first frame after Bowling Green’s Sean Walker slipped one past sophomore goalkeeper Atte Tolvanen in the last seconds of the Falcons’ first power play.

Bowling Green managed two more goals in the first period, widening the score difference between themselves and the ’Cats 3-0.

“It’s not a lack of effort with our team right now. I think everyone is giving their effort but I think it is paying attention to detail,” senior forward Dominik Shine said. “We are working at it. We will find a groove here soon and things will turn around.”

Over five minutes into the second period, senior forward Gerard Hanson got the puck in the left wing and laid it back to sophomore forward Troy Loggins at the edge of the left circle. Loggins beat Falcon goalkeeper Chris Nell and chalked up his second goal of the season and put NMU on the board.

Head coach Walt Kyle credited Loggins’ for his strong performance and effort especially considering he was previously out of action for a severe knee injury.

“I thought it was [Loggin’s] best game,” Kyle said. “We understand he’s not just going to come back and jump in on day one and be good and we know that. I think he’s getting better and better.”

Unable to carry the momentum on into the final period, NMU gave up two more goals to the Falcons ending the game 5-1.

On Saturday’s game, the Wildcats and the Falcons went back and forth, both racking up three goals each going into the final frame. The Falcons managed to pull ahead of the Wildcats in the third after a shot from sophomore forward Denver Pierce ricocheted off Nell out to Falcon John Schilling, who carried it the length of the ice and then beat Tolvanen stick side at 9:33.

The Falcons punctuated the game with an open-net goal in the final moments, wrapping it up at 5-3.

Reflecting on the weekend, Kyle said he felt that the team’s performance Saturday night had improved since Friday but the squad must fine tune their game for future success.

“We have to find a way to do whatever it takes. Whether that’s reducing our goals against or score more goals on a given night,” Kyle said. “We are finding different things on different nights that hurt us whether it’s penalty kills, lack of success on the power play or letting in a couple of soft goals.”

After a Bowling Green goal early in the first period, sophomore forward Brendan Jacques was able to bring the game back to a tie after deflecting a shot from junior defender Jordan Klimek right through Nell’s five hole, achieving his first career goal.

Junior forward Filip Starzynski kept the Wildcat momentum going and sent one right into the left corner of the net after freshman defender Philip Beaulieu made his way down the ice and found Starzynski with an open shot.

The third and final NMU goal came from senior defender Brock Maschmeyer who was able to put one in the net while the Wildcats had the man advantage.

The movement off the puck and screens set up by Wildcats in front of the net were factors of their penalty kill that allowed Maschmeyer to score, he said.

“We’ve been fighting the power play all year. But today it was coming together,” Maschmeyer added. “Boys are starting to move the puck. Even yesterday, getting that 5-on-3, we were shooting that puck, we were getting guys to the net. The opportunities were there.”

The Wildcats return to the ice on Nov. 11-12 at Bemidji State.