A Christmas classic coming to the community

“Bah humbug.” While the saying is all about the anti-Christmas spirit, hearing it evokes memories of one favorite Christmas tale—“A Christmas Carol,” better known as Scrooge. 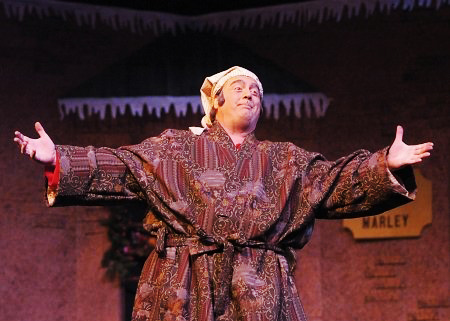 Forest Roberts Theater will be performing their take on a Christmas classic “Scrooge!” on the FRT stage Dec. 15 through Dec. 17.

NMU students and community members will gather to retell the beloved tale of a grumpy, cold geezer who discovers the true meaning of Christmas.

“We haven’t done ‘Scrooge!’ for quite a few years, but a lot of people in the community have been asking us to bring it back,” said Assistant Stage Manager and junior theatre major Amber Urban.
The FRT will be sticking to the classic storyline of “A Christmas Carol” by Charles Dickens, but will include one slight twist: music.

“It’s a really good version of it. There’s a couple of good musical numbers, some of them are going to be intricate and theatrical. I’m excited to see how everything looks at the end,” Urban said.

“A lot of the actors we have in the show have their own apartments so they don’t get kicked out of the dorms. The real issue is the kids who are in the dorms and don’t have a place to stay. The majority of them are going to be couch-surfing,” she said.

“I know I’m going to have one in my own house, so it’s not too hard to work around, but trying to get people who are willing to stay that extra week is kind of difficult.”

Most plays by the FRT are done by NMU students, but “Scrooge!” will involve many locals as well.

“It’s definitely a community based project versus a school thing, because so many community members are involved in this show and want to be because they saw it as a kid and they want their kids involved in it,” Urban said. “We have at least 20 kids and we do have a lot of older people from the community, so it’s definitely a nice mix of involvement.”

The community asked the theatre to bring their production of “Scrooge!” back to the stage, Urban said.

If the play is well received by the community this year, the FRT plans to continue its production each Christmas season, Urban said.

Alpha Psi Omega—NMU’s theatre honor society will be holding concessions. All proceeds from the production will go to the First Nighters Club, an NMU foundation presenting the production. The club funds the FRT and provides scholarships for theatre students.

Because the play will act as a fundraiser for the FRT, “Scrooge!” will not be a part of the Flex Season Pass.